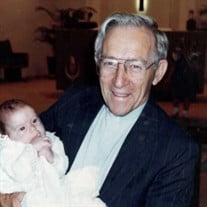 Kenneth Donald Baar of Bradenton, FL died Monday, August 3rd. He was born in Oshkosh, WI to Edward F. Baar and Eleanor Timmerman on August 21, 1926. He was in the U.S. Army and served in General MacArthur's headquarters as a typist/clerk in Manila and then in Tokyo. After discharge in 1946 he attended the University of Wisconsin at Madison, graduating with a degree in Business Administration. He answered the Call to Ministry and attended Trinity Seminary in Columbus, OH. There he met his wife Louise, whom he married in 1953, and they recently celebrated 67 of marriage. Upon graduating from the seminary in 1955, he accepted his first assignment as Assistant Pastor at Zion Lutheran Church in Pittsburgh. His next Call was to Grace Lutheran Church in New Orleans, LA. He was in the Ministers' Association, counseling sessions, and classes at the University of Louisiana in New Orleans. His daughter Ruth and son David were both born in New Orleans. The family enjoyed the history of the city, the parades of Mardi Gras, and the introduction to Southern food, all with great enthusiasm. He accepted a Call from the ALC Mission Board to build a mission church in West Bradenton called Redeemer Lutheran Church in 1963. Youngest Son Jim was born at Manatee Memorial Hospital in 1964. He was Redeemer's Pastor until he retired in 1991. He and Helen Blue began Meals on Wheels in 1972, he as Chairman of the Board until 1990, with prominent people on the Board. He was also on the Red Cross Board, Downtown Kiwanis, Girl Scout Gulf Coast Camp Development Committee, Coffee House with Pastor Jim Marsh at the Old Pier, PTA at Palma Sola Elementary School, proud band booster for each child in the Manatee High School Marching Band, and statistician of the ALC . After retirement he did several interim churches in the local area, moved to Lakewood Ranch and became a member of Lutheran Church in 1998, enjoyed a Summer home in the north Georgia mountains, attending Shepherd of the Hills Lutheran Church in Blue Ridge, and traveling with Louise across the U.S. and Canada in a 5th wheel trailer. They moved to Westminster Point Pleasant Retirement Center in Bradenton in 2017. Ken is survived by his wife Louise, daughter Ruth (Rick) Stoop, son David (Carolyn) Baar, son Jim (MaryJo) Baar, and 7 grandchildren: Ella Baar Seidel, Emily Baar, Ethan Stoop, Michael Stoop, and Amanda, Matthew, and Joey Baar. He was preceded in death by his brothers Harold and Edward. Ken is remembered as a totally good person who touched many lives. He baptized and married his three children, baptized all 7 grandchildren, married one grandchild, and performed other services to numerous people. There will be a Virtual Memorial Service, with only the immediate family in attendance, on Saturday, August 15th at 11:30 am. The service will be aired from Redeemer Lutheran Church, the church Pastor Baar began 57 years ago. Friends and relatives can join at Facebook.com by searching for Jim Baar and clicking the link to the Virtual Memorial. It will be steaming live at 11:30am. Cremated remains will be taken to the prayer garden at Redeemer Lutheran Church at a later date. In lieu of flowers, donations can be made to the Redeemer Lutheran Church Memorial Fund, Living Lord Lutheran Church Memorial Fund, Trinity Seminary, Columbus, OH, Fund for Leaders, and Manatee County Meals on Wheels.

Kenneth Donald Baar of Bradenton, FL died Monday, August 3rd. He was born in Oshkosh, WI to Edward F. Baar and Eleanor Timmerman on August 21, 1926. He was in the U.S. Army and served in General MacArthur's headquarters as a typist/clerk in... View Obituary & Service Information

The family of Kenneth Donald Baar created this Life Tributes page to make it easy to share your memories.

Send flowers to the Baar family.