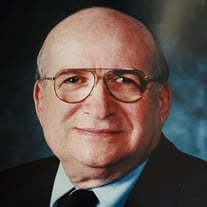 Leon Cooper passed away peacefully on July 11, 2020 at age 91 after a long and rewarding life. Born in Philadelphia on April 6th, 1929, to Russian immigrant parents, he was predeceased by three older sisters, Sara, Ida, and Rose and is survived by his loving wife, Rhoda Eisner Cooper of Longboat Key, his daughter Marilinne Cooper (James Severyn) and Barbara Cooper (Michael Price) and grandchildren Jamaica McCarthy (Alison Fernandez), Genevieve Severyn, and Cooper Price. The first in his family to graduate from college, Leon received a BS in Economics from the Wharton School of Business at the University of Pennsylvania in 1951. He served in the US Marine Corps and then began his career with a position as a buyer at Food Fair grocery stores in Philadelphia, quickly rising to Vice President of the Merchant Green Stamps division. From 1970 to 1973, he worked briefly in Detroit, Michigan, before accepting a job at Hartz Mountain in northern New Jersey as Vice President of Operations of the pet division. He spent 23 years at Hartz, finishing out his career as President of the pet division to retire to Longboat Key in December of 1996. After retirement, he worked many years delivering Meals on Wheels, and was very active in Temple Beth Israel in Longboat Key as a board member and devoted congregant. Throughout his life, Leon loved his cats, especially his retirement companion, Boomer, who predeceased him. Leon was devoted to his wife, he loved his children, and he adored his grandchildren. He will be remembered as a proud contrarian and a kind, responsible man with a sneeze so loud that it frightened small children and animals. He will be missed. Donations can be sent to the Humane Society of Sarasota County, 2331 15th Street, Sarasota, FL 34237 or All Faiths Food Bank, 8171 Blaikie Ct., Sarasota, FL 34240.

Leon Cooper passed away peacefully on July 11, 2020 at age 91 after a long and rewarding life. Born in Philadelphia on April 6th, 1929, to Russian immigrant parents, he was predeceased by three older sisters, Sara, Ida, and Rose and is survived... View Obituary & Service Information

The family of Leon Cooper created this Life Tributes page to make it easy to share your memories.

Send flowers to the Cooper family.