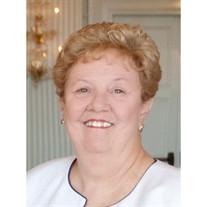 Linda Pat (Bucy) Swartz, age 73 of Sarasota, FL and formally of Greenville, MI and Murray, KY passed away on Saturday, March 3rd, 2018 at the Tidewell Hospice House in Sarasota after a courageous battle with lung cancer. Linda graduated in the first graduating class from Calloway County High School in 1961 and earned her teaching degree from Murray State University in Murray, Kentucky where she was also a member of the Sigma Sigma Sigma sorority. On July 16, 1966, Linda married the love of her life, Norman W. “Bill” Swartz and they moved to Greenville, Michigan where she continued her teaching career until her children were born. Linda and Bill spent 20 of their 51 years together in Greenville before moving to Illinois and then New Jersey before finally retiring in Sarasota, Florida in 1996. She participated in philanthropic and social clubs throughout the years including the 20th Century Club in Greenville, bridge clubs in Basking Ridge, New Jersey and the Newcomers and Encore clubs in Sarasota. Linda is survived by her husband, Bill Swartz; daughter and son-in-law Belinda and Keith Harris; son and daughter-in-law Brooke and Jason Swartz; and 5 grandchildren: Nicholas Harris (22), Greta Harris (19), Lucas Harris (18), Willa Swartz (4), and Luma Swartz (1); along with family in Kentucky, Tennessee, and Michigan. She is preceded in death by her parents, Robert and Carrie Bucy, and her sister, Carolyn Smallman. Linda was a wife, mother and counselor to her family and friends. Her grandchildren were the subjects of many conversations and always put a smile on her face. She had a love for travel that included trips to New York, Miami, New Orleans, Dallas, Houston, Los Angeles, San Francisco, Chicago as well as Hong Kong, Tokyo and Sydney. A gathering of friends and family will be held Thursday, March 15th, from 4:00-6:30 p.m. at Toale Brothers Funeral Home, 6903 S. Tamiami Tr., Sarasota, FL 34231.She will be laid to rest in a private ceremony at the Sarasota National Cemetery. In lieu of flowers, the family requests memorial donations be made to the Autism Society (autism-society.org), P.O. Box 677055, Orlando, FL 32867. Messages of condolence and memories may be sent via www.toalebrothers.com.

Linda Pat (Bucy) Swartz, age 73 of Sarasota, FL and formally of Greenville, MI and Murray, KY passed away on Saturday, March 3rd, 2018 at the Tidewell Hospice House in Sarasota after a courageous battle with lung cancer. Linda graduated in the... View Obituary & Service Information

The family of Linda Pat (Bucy) Swartz created this Life Tributes page to make it easy to share your memories.

Send flowers to the Swartz family.