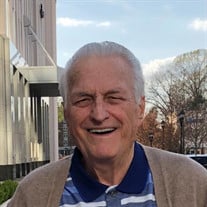 Louis Robert (Bob) duTreil, Sr., aged 88, a preeminent radio and television broadcasting engineer, died peacefully at Tidewell Hospice on March 19, 2021. Bob was born in New Orleans, LA on October 3, 1932, one of six brothers and three sisters, of L.J.N. (Joe) duTreil and Elise Abele duTreil. He was the last surviving member of his immediate family. His brothers and sisters were Louis Paul (Brother), Marie Elise (Sister), Louis Joseph Jr, Lucie, Louis Eugene, Louis Francis, Louis Abele and Marguerite. Bob’s early career started with his enlistment in the U.S. Coast Guard in 1952. Almost certainly he developed his later love for recreational boating during this time. After his service in the Coast Guard, Bob moved to Washington, DC to work in the radio broadcast field. He met his future bride, Barbara (Wall) duTreil in 1959 while working in the same building. Bob went on to complete his B.S. degree in Electrical Engineering at Louisiana State University in Lafayette, LA in May 1961. Later that year, Bob and Barbara married and they returned to Washington, DC. Bob then joined the firm of John H. Mullaney & Associates where he remained until 1967. Bob’s first two children were born during this period, Louis Robert, Jr. and Marguerite Marie. Bob was introduced to radio engineering during his youth in New Orleans, where his father was a preeminent radio engineer, having contributed to the original construction of AM broadcast station WWL in the late 1920s and early 1930s. Joe duTreil started his own engineering firm after his career with the Federal Communications Commission. In 1967, the family moved to New Orleans where Bob partnered with his father at L. J. N. duTreil & Associates, from 1967 to 1970. During this time, his third child, Louis Michael was born. In 1970, the family returned to Washington, DC and Bob joined Jules Cohen & Associates. He later was made partner and remained with the firm until 1983. Bob launched his own firm, duTreil-Rackley with a colleague, Ronald Rackley, in 1983. They later merged with A.D. Ring & Associates, then headed by John Lundin, in 1987 to form duTreil, Lundin & Rackley, Inc. The firm continues to the present day under the leadership of Bob’s namesake, Bob duTreil Jr, and partner, Jeff Reynolds. After retirement in 2006, Bob pursued volunteer work at the Coast Guard Auxiliary and Sarasota Memorial Hospital. He enjoyed joking with the patients and keeping folks in good cheer during his volunteer work at the hospital. Bob later became president of the Sarasota Memorial Hospital Volunteer Auxiliary Service and served in that role for two years. Bob was a Senior Member of The Institute of Electrical and Electronics Engineers (IEEE). He was also a Member, and former President, of the Association of Federal Communications Commission Consulting Engineers (AFCCE), a professional society based in Washington, DC. Bob was the recipient of the prestigious Engineering Achievement Award by the National Association of Broadcasters in 2011. Bob and Barbara enjoyed domestic and international travel throughout the years, including many fine adventures with their friends and peers associated with the National Association of Broadcasters. Bob loved socializing with family and friends and he and Barbara hosted many memorable parties. He enjoyed fine dining, boating, fishing, walking and gardening. Bob shared many epic adventures with family and friends on the various boats, large and small, that he owned through the years. Many can retell stories of amazing trips and trips gone wrong that always ended with a laugh or smile. Bob delighted in his time on the water and passed on his love of nature to his children and grandchildren. Bob had an eternally playful spirit that was always at the ready with jokes, funny gestures and various toys to impress and entertain. He will always be remembered as a jovial, warm, generous, loving spirit – leaving an imprint on all the hearts he touched with his wonderful nature. Bob was a devoted Catholic throughout his life and shared his love of Christ through his love for others. Bob is survived by his wife of 59 years, Barbara; son Robert Jr and spouse, Beth (Baffer), daughter, Marguerite and spouse, Eric Surette, and son, Michael; his grandchildren, Anthony Centurione, Barbara Noelle Melendez and spouse, Marvin, Rachel Surette, Elise duTreil, Megan duTreil, Justin duTreil and spouse, Anna Kathryn (Littleton) and Claire duTreil; and his great grandson, Emmanuel Melendez. Memorial donations may be made to Tidewell Hospice in Sarasota at https://tidewellfoundation.org/donate/ or the Sarasota Memorial Healthcare Foundation in support of the Brian D. Jellison Cancer Institute in Sarasota at https://hopecomeshome-smhf.com/donate/.

The family of Louis Robert duTreil, Sr. created this Life Tributes page to make it easy to share your memories.

Send flowers to the duTreil, family.