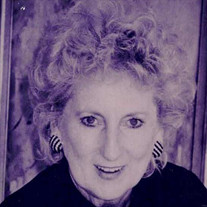 Lovene Haley Motter, 84, of Sarasota, Fl. passed away on Tuesday November 24, 2020 in Sarasota. She was born December 4, 1935 in Stokes County, NC and grew up in Mayodan, NC. Lovene began a long career in property management in Charlotte, NC in 1970. She was so successful that she moved all over town and then around the country to bring under-performing properties up to the Gold Standard which she set. Her work ethic was un-matched but she also loved to have fun. As a result of that fun-loving personality and the genuine care she showed to other people, She made many life-long friends in many cities in which she lived…..Charlotte, Raleigh, Greensboro, Nashville, Dallas, Orlando and then back to Charlotte. Those friends are too numerous to name but they all meant so much to her. It was shortly after that last move back to Charlotte that she met the Love of her Life, Bill Motter. Lovene and Bill were married in 1995 and they moved to Sarasota, Fl. shortly thereafter. Bill was her Prince Charming that she had waited for all her life and the two of them literally lived “happily ever after.” Her many friends and family would tell you that the one word that best described Lovene was “thoughtful”. She was always the one to send the card for every occasion, to call and check on all of her family and friends. She always wanted to know that everyone was OK. Lovene was passionate about her family and loved them fiercely. Her mother was her life-long best friend, her only son was her pride and joy and she absolutely adored her grandchildren and great-grandchildren. Her youngest grand-daughter Emily was always her special “Pretty Girl” and their bond was so very beautiful to see. She had many cousins and other family that she loved very much and spoke with often. All of her family will miss her terribly. Lovene was preceded in death by her mother, Beulah Woods. She is survived by her husband Bill Motter of Sarasota, Fl., her son Jeff Newton (Shelley) of Charlotte, NC, her step-sons Billy Motter (Janet) of Beaverton, Or., and Marc Motter of Scottsdale, Az., her grandchildren Haley Newton (David) of Charlotte, NC., Brandon Newton (Amber) of Greensboro, NC, Emily Newton of Charlotte,NC and Max Motter of Beaverton, Or. and great-grandchildren Harper and Judah Newton of Greensboro, NC. She is also survived by numerous cousins and other relatives. The family will have a celebration of Lovene’s life after the first of the year at a place and time TBD. In lieu of flowers, the family would ask for donations to St. Jude Children’s Research Hospital at www.stjude.org.

Lovene Haley Motter, 84, of Sarasota, Fl. passed away on Tuesday November 24, 2020 in Sarasota. She was born December 4, 1935 in Stokes County, NC and grew up in Mayodan, NC. Lovene began a long career in property management in Charlotte,... View Obituary & Service Information

The family of Lovene H. Motter created this Life Tributes page to make it easy to share your memories.

Lovene Haley Motter, 84, of Sarasota, Fl. passed away on Tuesday...

Send flowers to the Motter family.