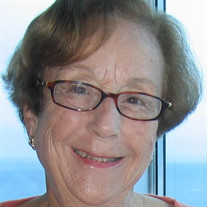 Lucy Marie Gabriel (neé Engelbrecht) died peacefully on February 14, 2022 after a long illness. With her at the time of her passing were her husband and her children. She was born in Curaçao, Netherlands Antilles on February 19, 1932. Her father was Dr. Rudi Engelbrecht and her mother was Jacqueline Engelbrecht (neé Wijnschenk). She migrated with her family to the United States in 1950 where she attained a Bachelor of Arts degree in Romance Languages from Queens College in New York City. Lucy then trained as a bi-lingual secretary and was employed by Pan American Airways in that capacity. She was fluent in English, Dutch, Spanish, French and Papiamento, a dialect spoken only in the three ABC islands of the Netherlands Antilles. She became a citizen of the US in 1958. Lucy met her husband of sixty-six years at Queens College, and together they lived in eight different states in the US and travelled extensively over the years. She was a very successful Real Estate Broker and was licensed in Florida, Ohio and Wisconsin specializing in housing for senior citizens. Lucy was a member of St. James Methodist Church in Sarasota. In addition to her husband, Richard, she is survived by her daughter, Jessica Gabriel, her son Geoffrey and his wife Ann (neé Wall), four grandchildren, Elizabeth, Katheryn, Alexandra & William, and her brothers, Frederick Engelbrecht of Tarpon Springs and Roy Engelbrecht of Pittsburgh, PA. In addition, she was predeceased by her granddaughter Rebecca and brothers Rudi and William. Visitation will be from 5:00 PM to 7:00 PM on Friday, February 18 and a memorial service will be held at 11:00 AM on Saturday, February 19. Both will be at the Toale Brothers Funeral Home at 912 53rd Street West, Bradenton. In lieu of flowers, donations should be made to the Shriners Children’s Hospital or any other charity of your choice.

Lucy Marie Gabriel (neé Engelbrecht) died peacefully on February 14, 2022 after a long illness. With her at the time of her passing were her husband and her children. She was born in Curaçao, Netherlands Antilles on February 19, 1932. Her... View Obituary & Service Information

The family of Lucy Marie Gabriel created this Life Tributes page to make it easy to share your memories.

Send flowers to the Gabriel family.