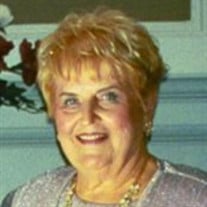 Marilyn Joyce Schultz, an educator from Toledo, Ohio and loving wife, mother, grandmother and aunt, passed away on January 26, 2021, in Sarasota, Florida, shortly after the loss of her beloved husband of 65 years, Donald Robert Schultz. Marilyn was the embodiment of warmth and humor which she radiated throughout her life to family and friends, keeping them laughing while blanketing them with love. She dedicated her life to her husband, daughters and countless students who benefitted from her affectionate guidance, perceptive insights and infinite wit. Born on December 21, 1930, Marilyn grew up on Brighton Avenue in Toledo, Ohio. The granddaughter of immigrant German farmers, Marilyn spent most weekends at their Woodville, Ohio farm where she learned to drive the family Chevy at age 11 and developed a love for her grandmother’s delicious cooking. Her highly creative mother, Augusta Heuerman, was an expert seamstress who instilled in Marilyn a life-long love for sewing, fashion and jewelry. Her father, Herbert Heuerman, who played the harmonica by ear, bestowed Marilyn with the musical talent to master the piano and intricate jazz chording by her early teens. Marilyn graduated from Libbey High School in 1948 where her favorite class was Latin and she was active in several friendship clubs. Subsequently, she attended the University of Toledo, joining the Phi Beta Phi Sorority and earning an Education degree in 1952. During her senior year, Marilyn was introduced to her future husband Don on a blind date arranged by her brother, which she finally agreed to after being promised that he was tall. With Don stationed at Camp Polk, Louisiana in the National Guard, Marilyn began teaching at Walbridge Elementary School. Despite the distance between them, Marilyn and Don stayed in touch via love letters and long train rides, culminating in their marriage on July 16, 1955. According to Don, it was Marilyn’s stunning blue eyes, charming nature, and good dance moves that kept him asking for dates. In 1963, Marilyn and Don moved to a new home in south Toledo where they spent the next 40 years raising their daughters, Susan and Linda. During this time, Marilyn continued to teach in the Toledo Public School System, taking a ten-year break to focus on being a Mother and Homemaker. In this role, she mastered the art of taking her daughters out to dinner on nights when Don worked late, and making the coolest bell bottom jeans. After returning to work, Marilyn spent the rest of her career at Glendale-Feilbach Elementary School, teaching children with special needs, where she was renowned for her creative bulletin boards, lively piano playing, and hilariously funny stories told during teacher lunch breaks. In 2002, Marilyn and Donald moved to a golf community in Sarasota, Florida where she enjoyed spending time with her daughters, grandchildren, and good friends from Toledo who lived nearby. During her retirement, Marilyn enjoyed frequent community social gatherings, relaxing by neighborhood pools, and taking in the scenic lake and golf course view from her lanai. Marilyn’s family will best remember her as a loving, caring and kind person who was fiercely devoted to her family and friends. She had the uncanny ability to strike up conversations with absolute strangers and become quick and lasting friends. She had a humorous nature and loved to tease her students and grandchildren. She was happiest in social situations and loved parties, family dinners and playing bridge. She had a natural talent for design, making every home lovely and cozy with eye catching furnishings and interesting knick knacks. She had a keen intelligence and creativity as evidenced by the heartfelt and amusing poems that graced the custom greeting cards she made for family, colleagues and friends. She enjoyed travelling, but felt most at home in Toledo, Ohio where her heart remained throughout her life, reading the Toledo Blade daily and dedicating hours to creating family scrapbooks and documenting genealogy. Marilyn will remain forever in the hearts of her daughters Susan (Glen) Adams and Linda Calvin, grandchildren Jocelyn and Grant Calvin, brother Ralph Heuerman, niece Christine Lemay, and nephews Kurt (Barbara) Heuerman, Karl (Elise) Heuerman, and Bruce (Karen) Shane. She has been reunited with her cherished husband Don, loving parents Augusta (Koring) and Herbert Heuerman, sisters-in-law Janet Heuerman, Wanda Erkert and Phyllis Shane, brothers-in-law Bob Erkert and Ed Shane, nephew Matthew Shane, and her favorite orange tabby cat Taffy, and dog Dutchie. A Celebration of Life for Marilyn will be deferred until a later date due to the continuing challenging times. Marilyn’s ashes will be interred, alongside those of her dearly loved husband Don, in the Sarasota National Cemetery. In lieu of flowers, please support an organization meaningful to you, or contribute to The University of Toledo. “One touch of nature makes the whole world kin.” – William Shakespeare

Marilyn Joyce Schultz, an educator from Toledo, Ohio and loving wife, mother, grandmother and aunt, passed away on January 26, 2021, in Sarasota, Florida, shortly after the loss of her beloved husband of 65 years, Donald Robert Schultz. Marilyn... View Obituary & Service Information

The family of Marilyn Joyce Schultz created this Life Tributes page to make it easy to share your memories.

Marilyn Joyce Schultz, an educator from Toledo, Ohio and loving...

Send flowers to the Schultz family.