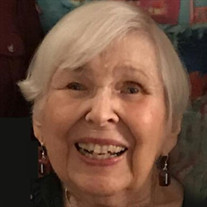 Marjorie J. Johnson, 93, a resident of Sarasota, Florida since 1985, formerly of Weymouth, Massachusetts, died peacefully at the Tidewell Hospice House on October 8, 2020 after a brief downward decline. “Marj” had a long and full life which was blessed with many wonderful things and she was dearly loved by family and friends. Marj was predeceased by her loving husband of sixty-seven years, Nils, in 2016. She is survived by her daughters, Gail Emmott and Lynne McKay, her son-in-law, Arthur McKay, her grandson, Christopher McKay, her granddaughter, Kelsi Falconer and her husband, Nathan. She leaves behind her cousin, Harold Jones and his wife, Barbara, and her cousin through marriage, Patricia Evans. Marj grew up in Quincy, Massachusetts. She was a graduate of Quincy High School Class of 1944 and earned a BA from Massachusetts College of Art. She and Nils were married at Bethany Church in Quincy, Massachusetts in 1948. Marj was an avid watercolorist. She and Nils traveled extensively to attend American Watercolor Society Workshops. Their travels included Italy, Sweden, Hawaii, Mexico, New Mexico, Michigan and Maine. She and her husband were members of the Neighborhood Club of Quincy and were involved with the former Leech Studio in Sarasota, Florida. Marj was an avid reader and in her younger years she enjoyed golfing and bowling. Marj was an incredible cook. She was a proud Conservative and supported Donald Trump. A private Memorial Service will be held at a later date. Interment will be at Sarasota National Cemetery. In lieu of flowers donations may be made to: Rheumatoid Arthritis Foundation, Help Fight RA, 8815 Conroy Windermere Rd. Suite 309, Orlando, FL 32835.

Marjorie J. Johnson, 93, a resident of Sarasota, Florida since 1985, formerly of Weymouth, Massachusetts, died peacefully at the Tidewell Hospice House on October 8, 2020 after a brief downward decline. &#8220;Marj&#8221; had a long and full... View Obituary & Service Information

The family of Marjorie J. Johnson created this Life Tributes page to make it easy to share your memories.

Marjorie J. Johnson, 93, a resident of Sarasota, Florida since...

Send flowers to the Johnson family.