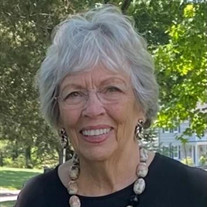 Martha Jean Caesar, age 79, died peacefully in Sarasota, Florida on Sunday, January 30, 2022 after a brief but valiant battle with a resurgent cancer from 14 years ago. Born in Baltimore, Maryland on May 11, 1942 to Jean and Daniel Steiner, Martha was the oldest of three siblings who grew up in Michigan, first in East Lansing and then in Bloomfield Hills. Her family also built a cottage on Glen Lake in Leelanau County, which became a favorite gathering spot and source of memories for four Steiner generations. Martha graduated from Michigan State University in 1964, remaining a devoted lifetime Spartan and member of Gamma Phi Beta. She became a high school Spanish teacher and soon caught the gaze of Albert Caesar at a mixer in Detroit. Al was taken by her striking eyes and gorgeous smile, and they were married in 1966 at the Kirk in the Hills Presbyterian Church in Bloomfield Hills. The journey for Martha and Al included welcoming sons Al and Dan while moving to Atlanta, Philadelphia, London, and back to Philadelphia, where they resided in Bryn Mawr since 1980. The Caesars spent many summers at Long Beach Island, New Jersey, returned often to Glen Lake, and eventually spent their winters in Longboat Key, Florida. Martha faced her greatest adversity when son Dan was killed by lightning in 1993, which she overcame in part by supporting students who shared Dan’s love of music and by helping others cope with loss as a hospice worker. Her family began growing again when son Al married Stephanie Belko Caesar in 2000, and Martha embraced being a grandmother, rarely missing a chance to cheer for their four children at dance, soccer, football, and lacrosse competitions. Connection with family and friends was extremely important to Martha and, as an optimist and friendly Midwestern girl, she could strike up a conversation with almost anyone. She built new friendships naturally and strengthened family tree branches, growing her Christmas card list at every stop. She was a planner, starting from her days as House Manager for her sorority to organizing events that brought others together for causes including the University of Pennsylvania Museum, the Philadelphia Orchestra, and the Junior League. Martha rarely hesitated to speak up, often with her edgy sense of humor (“Oh, Grandma!”) and especially if she saw a chance for generosity to others. Martha was perpetually curious, consuming newspapers and diving into other topics ranging from marine life, serving as a guide at the Mote Aquarium in Sarasota, to the intricacies of offsides rules in her grandchildren’s sports. Her sense of adventure led her to travel far and wide, including to Alaska, China, Russia, South America, Australia, New Zealand, and throughout Europe. Martha was predeceased by her parents Jean and S. Daniel Steiner, brother Mark Steiner, and son Daniel Caesar. She is survived and incredibly missed by her loving husband of 55 years Albert Caesar, brother Tom Steiner, son Albert Caesar and his wife Stephanie, grandchildren Emma, Albert (A.J.), Daniel, and Carly, and many nieces, nephews, and other extended family. A memorial service and reception will be held on Saturday, February 26 starting at 12 p.m. at the Bryn Mawr Presbyterian Church at 625 Montgomery Ave., Bryn Mawr, PA. Zoom will be available for those unable to attend in person. In lieu of flowers, memorial gifts may be made to the Breast Cancer Research Foundation in memory of Martha Caesar at https://give.bcrf.org/MarthaCaesar.

Martha Jean Caesar, age 79, died peacefully in Sarasota, Florida on Sunday, January 30, 2022 after a brief but valiant battle with a resurgent cancer from 14 years ago. Born in Baltimore, Maryland on May 11, 1942 to Jean and Daniel Steiner,... View Obituary & Service Information

The family of Martha J. Caesar created this Life Tributes page to make it easy to share your memories.

Send flowers to the Caesar family.