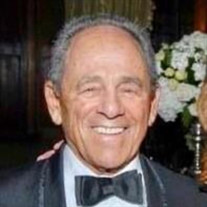 Marvin Paul Norin, 94, passed away peacefully in Sarasota, Florida on December 4, 2021 with family by his side. Marvin was born on March 12, 1927 in Philadelphia, Pennsylvania. He was predeceased by his parents Nathan Norin and Rose Task Norin, sister Evelyn Norin Snyder, and his wife Judith Greenfield Norin. He is survived by his loving wife, Joyce Norin, beloved children Lisa Doyle and Michael Norin (Tammy) adored grandchildren, great grandchildren, and great-great grandchildren. He was truly Poppy the great. Marvin’s parents were immigrants to the United States who raised both him and his sister Evelyn to study hard and fulfill their potential. By any measure, Marvin was successful. He was well-educated. He graduated from Northeast High School in 1945. While still in high school, Marvin served his country from 1944 to 1947 in the United States Coast Guard and the United States Merchant Marine as Midshipman in the Merchant Marine Reserve, a branch of the United States Naval Reserve. He attended Penn State University, earning a BS and an MS in Mechanical Engineering in 1952. His professional credits attest to his expertise in fluid mechanics and the use of nuclear power, beginning at the Franklin Institute Laboratories (1952-1969) and at Martin Marietta, Nuclear Division (1959-1968), then at the United States Department of Energy (1968-1988), attaining the title of Director, Office of Regulatory Development, Nuclear Energy Programs (1985-1988). Before retiring in 1991, Marvin was Senior Scientist, Special Projects Division, at the Science Applications International Corporation, responsible for nuclear safety and quality assurance of reactor production and research. He was an avid lover of sports, both as a competitor and spectator. His greatest sports accomplishment was competing in a half ironman triathlon. Whether it was swimming, biking, running, hiking, kayaking, skiing, or playing tennis, he was always on the go, remaining active and engaging in sport. Marvin lived every day to its fullest. He was a faithful friend, and he kept up his friendships over many years. Perhaps it was his smile, his easy embrace, his quick laugh, the glimmer in his eyes. Easy to love, easy to be with, he was much adored by so many. He will forever be in our hearts.

Marvin Paul Norin, 94, passed away peacefully in Sarasota, Florida on December 4, 2021 with family by his side. Marvin was born on March 12, 1927 in Philadelphia, Pennsylvania. He was predeceased by his parents Nathan Norin and Rose Task Norin,... View Obituary & Service Information

The family of Marvin Paul Norin created this Life Tributes page to make it easy to share your memories.

Send flowers to the Norin family.