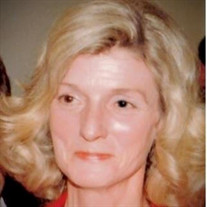 Mary Ellen (Beil) Cier Jacobs, 84, passed away peacefully on March 7, 2022, at her home in Sarasota, Florida. Mary Ellen was born in Sharon, PA, on Oct. 11, 1937 to the late Joseph Augustine Beil and Kathryn Marie (Doyle) Beil. Growing up in Youngstown, OH, Mary Ellen was the youngest of eight children. Her only brother, Bob, was killed in the Pacific in WWII. Mary Ellen attended St. Columba Grade School and Ursuline High School in Youngstown and graduated in 1955, whereupon she attended Youngstown State. She was working as a receptionist in a dentist’s office when she took an immediate shine to a particular patient and said to herself, “That’s the man I’m going to marry.” Mary Ellen married Donald J. Cier in 1961, at St. Columba Cathedral in Youngstown, Ohio. By 1966, the couple had three children and one on the way when Don was sent out to Utah to open and run a steel fabrication plant in Centerville. The family settled in the Olympus Cove neighborhood southeast of Salt Lake, and soon after, Mary Ellen was raising four children under the age of five. Living in Utah was quite a contrast for Mary Ellen, who was quick to point out the differences between Utah and eastern Ohio. One of her challenges was finding a hamburger not slathered in fry sauce, the ubiquitous Utah condiment that she referred to as “goop.” One of her favorite ways to hang on to her midwestern roots was to watch and cheer on her beloved Pittsburgh Pirates. She had dated a couple of Pirates in her day, friendships made though her uncle, Charles “Chilly” Doyle, who was sports columnist for the Pittsburgh Sun-Telegraph and covered the Bucs for 42 years. Mary Ellen was an active volunteer and was a member of the Salt Lake Junior League. After serving as a “Pink Lady” at Holy Cross Hospital, she got involved with the American Trauma Society and eventually served as the president of the Utah division, helping to promote the learning of emergency life-saving procedures across the state. She also served on the Utah Safety Council, St. Francis Guild, PTA, Women’s Legislative Council, and the Foster Grandparents Advisory Board (as Chair). Her board service also included the Catholic Women’s League, Holy Cross Hospital Auxiliary, and The Children’s Center. An active lifelong Catholic, Mary Ellen made sure her four children received a Catholic education, and she would often volunteer at St. Ambrose Parish and its grade school, Cosgriff. Mary Ellen was an active golfer, skier, and paddle tennis player, though she suffered from life-long back pain due to an accident with a drunk driver when she was driving her children home from grade school. Many surgeries and back braces followed, but she always worked hard to regain her strength and be there for her family. Don and Mary Ellen retired to Sarasota in the 90’s, but ended up divorcing. Mary Ellen married Jake Jacobs in 1998, and they spent many happy years together, golfing, traveling, and enjoying their grandchildren. Jake passed away in 2012, and Mary Ellen continued to live in Florida, volunteering for the Manatee County Sheriff’s Office and spending time with her wonderful University Park neighbors. The last couple of years were difficult for Mary Ellen, though she always maintained her irreverent sense of humor and her love for her children and grandchildren. She could be seen cruising the neighborhood on her three-wheeled bike until just last year, and she would always ring the bell whenever she road by the house of her good friends, John Hargreaves and Dan Rex. Mary Ellen is predeceased by her parents, siblings, first husband, Donald J. Cier, and by her second, Robert E. Jacobs. She is survived by her four children: Andy (Lynn), Elizabeth (Gary), Ted, and Jeff (Debi); four stepchildren: Scott, Bob, Terry, and Ardian; five grandchildren: Andrew, Gracie, Kate, Izzie, and Ollie; and seven nephews: Joe, Greg, Tom, Jim, Rich, Tony and Ken. A service and celebration of life will be held in Utah in June. In lieu of flowers the family asks that donations be made to the food pantry at St. Jude Catholic Church, Sarasota. The family would like to especially thank Mary Ellen’s neighbors, Dan & Lisa Carter, Dan Rex & John Hargreaves, and David & Yukiko Brown for their love and support, and her wonderful caregivers, including Marianna, Maxine, Nataliya.

The family of Mary Ellen (Beil) Cier Jacobs created this Life Tributes page to make it easy to share your memories.

Send flowers to the Jacobs family.