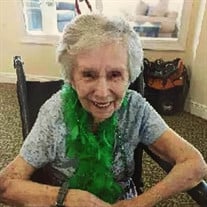 Jane was born to Harry and Maude Leibrand on December 12, 1928 in Washington, D.C. She graduated early from Anacostia High School before attending Blackstone College in Blackstone, Virginia, earning her associate’s degree. She then married the love of her life and sweetheart since junior high, Robert Wolfgang, and resided in Congress Heights. Jane worked for a time at the Census Bureau in Suitland, Maryland. With the birth of her third and fourth children, Jane became a stay-at- home mom. After the family moved to Maryland in 1957 and all the children were in school, Jane returned to the workforce as a substitute teacher and later as a bookkeeper for Crossland High School in Camp Springs. Jane and Bob relocated to Florida in the ‘70’s, where she volunteered at the Women’s Exchange and worked for the School Board of Sarasota County. In 2002, Jane suffered a series of strokes that left her partially disabled. She was predeceased by her sisters, Helen Madara and Alice Vermillion, and her beloved husband of 65 years, Robert Wolfgang. Jane is survived by their four children: Regina and Robert, both of Sarasota, Roger (Sandy) of Millsboro, Delaware, and Robin Nogle of Dunkirk, Maryland; six grandchildren: Lindsay A. Hohl (Brian}, Joseph Nogle (Lydia), Adam Nogle, Kimberly Lee (Matt), Zeke Wolfgang (Bridget), and Max Wolfgang. She also leaves behind five great grandchildren: Chaedence, Brody, Chloe, and Chiara Lee, and Jerome Wolfgang Nogle. There are no plans for a memorial service.

Jane was born to Harry and Maude Leibrand on December 12, 1928 in Washington, D.C. She graduated early from Anacostia High School before attending Blackstone College in Blackstone, Virginia, earning her associate&#8217;s degree. She then married... View Obituary & Service Information

The family of Mary Jane Wolfgang created this Life Tributes page to make it easy to share your memories.

Send flowers to the Wolfgang family.