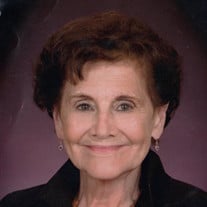 Mary Nicholson (nee Margaritis) passed away on November 30 in Sarasota Florida, undoubtedly with a song in her heart. Mary was born on February 26, 1929 to Greek immigrants, Theodore and Anna (nee Ballis) in Chicago, Illinois. She is preceded in death by her dear husband Gust Demetrios Nicholson and her sisters Angeline (Sam) Trigourea and Theodora (Louis) Bakouris. Mary was a remarkable woman with a passion for teaching that had a positive impact on the lives of many children for nearly 50 years. A true trailblazer, she graduated from DePaul University in the early fifties and began teaching first grade in Wood Dale, Illinois. After taking a break to raise her children, Mary returned to the classroom in the late 1960s to once again teach first grade at Greenbrier Elementary School in Arlington Heights, Illinois. Nearly 20 years later, Mary retired as a public school teacher, but continued to share her gift at private schools in Garland, Texas and Sarasota, Florida. Mary’s Greek Orthodox faith was an important part of her life. She and her husband were founding members of St. John Greek Orthodox Church in Des Plaines, Illinois and joined St. Barbara Greek Orthodox Church in Sarasota when they moved to Florida 27 years ago. Mary was a born performer with a beautiful voice. From an early age she began singing in the choir at St. Basil Greek Orthodox Church in Chicago as she did at every church she attended. She is survived by her four children Cynthia (Stirling) Mays, Ellen Nicholson, Cathy (Bruce) Dammann, Theodore (Laura) Nicholson; seven grandchildren Theodore (Tina) Mays, Ann (Andrew) Shutt, Emma (Sam) Perreth, Nick (Mallory) Dammann, Alex Dammann, Ryan Nicholson and Joseph Nicholson; one great grandchild, Slade Mays; two siblings, Sotiris (Linda) Tontis and Chrisanthy (Dave) Myers and numerous nieces and nephews. Mary was larger than life and will be truly missed by all who knew her. Visitation will be at 10 am followed by the funeral service at 11 am, Thursday December 3rd at St. Barbara Greek Orthodox Church, 7671 Lockwood Ridge, Sarasota Florida. Due to Covid restrictions, a virtual funeral service will be accessible at www.moonbeamvideocasting.com/mblivestream. Private burial will be Monday, December 7 in Arlington Heights, Illinois.

Mary Nicholson (nee Margaritis) passed away on November 30 in Sarasota Florida, undoubtedly with a song in her heart. Mary was born on February 26, 1929 to Greek immigrants, Theodore and Anna (nee Ballis) in Chicago, Illinois. She is preceded... View Obituary & Service Information

The family of Mary Nicholson (nee Margaritis) created this Life Tributes page to make it easy to share your memories.

Mary Nicholson (nee Margaritis) passed away on November 30 in...