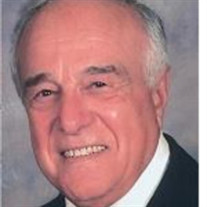 Michael Domonick LoRusso (Mike) passed away peacefully in Sarasota, FL on July 7, 2021 at the age of 91. Mike was born on November 20, 1929 in Paterson, NJ to Domonick and Jennifer (Sicuralli) LoRusso. He grew up in northern New Jersey, where he lived most of his adult life. He graduated from St John’s Highschool in 1948 and enlisted in the US Navy. Following four years of honorable service during the Korean War, he took several courses in Lithography and became a pressroom supervisor. He was employed by The Beckley Press and the Economics Press in Fairfield, NJ for nearly 40 years – rising through the organization from the pressroom to President & CEO. Mike retired in 1995, spending summers with his wife, Christine (Gioia) LoRusso at their home in Loveladies, NJ on Long Beach Island and winters at their second home in Sarasota, FL. Eventually the couple (married in 1955) settled full-time in Sarasota. Mike enjoyed playing basketball, tennis, bowling, and later in life his fitness group. He was an avid home improvement “do-it-yourself” person who also enjoyed woodworking and model building. What he enjoyed most with family and friends was being by the water – boating, fishing, and relaxing on the beach. He became quite the chef during retirement and had a passion for cooking and entertaining for family and friends. A devoted husband and loving father, grandfather, and great-grandfather, he will be missed for the many memories he was part of creating. Mike is survived by his daughter, Patricia (LoRusso) Casazza, her two sons, Christopher and Alexander, and his great-granddaughter Mia. He is also survived by his son, Michael C. LoRusso, his wife Jeanine, and their two daughters, Natalie and Emily. He will be interned at the Sarasota National Cemetery with his beloved wife Christine. Donations to Tidewell Hospice in Mike’s memory are greatly appreciated.

Michael Domonick LoRusso (Mike) passed away peacefully in Sarasota, FL on July 7, 2021 at the age of 91. Mike was born on November 20, 1929 in Paterson, NJ to Domonick and Jennifer (Sicuralli) LoRusso. He grew up in northern New Jersey, where... View Obituary & Service Information

The family of Michael Domonick LoRusso created this Life Tributes page to make it easy to share your memories.

Send flowers to the LoRusso family.