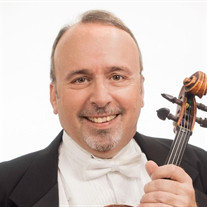 Michael R. McClelland, of Sarasota, Florida, passed unexpectedly at home on Saturday, July 17, at the age of 62. An accomplished musician, he was known for his talent, wit, compassion, and intelligence, and was loved and respected by his family, friends, and colleagues. Born and raised in Pittsburgh, Pennsylvania, Michael received his Bachelor of Music from the Peabody Conservatory of Johns Hopkins University. His music career spanned more than 40 years, and he established a reputation as one of the leading viola teachers and performers in the United States. The Washington Post praised his "effortless technique,” hailing him as “a true artist among the new generation of performers." Prior to joining Sarasota Orchestra’s viola section in 2004, he held appointments as an assistant professor of music at the University of Illinois and as a faculty artist of the Harid Conservatory. He was a founding member of the Baltimore String Quartet from 1984-1988 and performed three tours of Europe with the ensemble. He also founded the Chroma Quartet with three Sarasota Orchestra colleagues, which performed from 2006-2014. His solo recitals and chamber music performances took him to concert halls throughout the United States, Canada, Scandinavia, and the former Soviet Union, and he performed at Carnegie Hall. Michael also lent his talents to the Theater Chamber Players of the John F. Kennedy Center and the Jefferson String Quartet, and was a member of the Chamber Artists of Washington. Other career highlights include engagements with the York Symphony Orchestra, Baltimore Symphony Orchestra, Baltimore Opera, Annapolis Symphony Orchestra, Champaign-Urbana Symphony, Sinfonia da Camera, and the Florida Philharmonic. In addition to music, Michael had a passion for aviation, cooking, painting, and sewing. His life was full with friends and his Sarasota Orchestra family. He is preceded in death by his husband, Walker Meade, and mother, Kate (Rettger) McClelland. He is survived by his father, Ronald McClelland, and his partner, Paulette George; his sister, MaryJo (McClelland) Kurtz, and her husband, Gary; and two nephews, Samuel and Joseph Kurtz. A celebration of his life will be announced at a later date. Charitable donations in his honor may be made to the Sarasota Orchestra, 709 N. Tamiami Trail, Sarasota, FL 34236. In tribute to his love of music, the family hopes that you make time to enjoy the music that you love.

Michael R. McClelland, of Sarasota, Florida, passed unexpectedly at home on Saturday, July 17, at the age of 62. An accomplished musician, he was known for his talent, wit, compassion, and intelligence, and was loved and respected by his family,... View Obituary & Service Information

The family of Michael R. McClelland created this Life Tributes page to make it easy to share your memories.