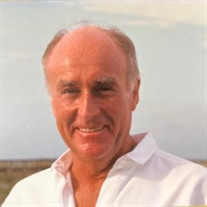 Neil Drummond Saunders age 88, left us on April 19th after a long life and a short battle with cancer. Never the one to complain he is now free again. In life his sense of adventure kept him moving forward with faith in the better nature of the universe and a belief the next great thing was underfoot. A creative mind allowed him to start and form a number of business ventures. A passionate heart, his warm smile, and love of people kept him in the good graces of those he called friends. He loved the outdoors especially his time in Jackson, WY as well as the challenge of a competitive game of tennis, or golf. He treasured his relationship with animals and leaves behind his beloved four-legged friend "Lilly". Born in Montreal, Canada to Fred and Lilly Saunders, Neil was the middle child between an older brother Roy(decd.) and his sister Diane. He studied communications at Sir George Williams College (now Concordia) but was quick to add that he was educated through his time in service as both an Officer in the Canadian Navy and later in the United States Marine Corps having joined after emigrating to America in 1958. He loved his new country (just ask his bumper stickers) and spoke often about his passion for the values America represents. He was a storyteller and promoter of what he believed in, having applied these skills to everything from the early days of banking computer equipment to real estate, a family business, more than a few Sarasota condominium developments, and later in life to causes he felt made the world a better place. He is survived by three children from his first marriage, Jane Saunders, Dru Saunders, and Isabelle Brock and a son, Drayton Saunders from his second marriage to Michael Saunders. He was always quick to point out that his grandchildren, Kinsley, and Beckett Saunders, filled his heart with ultimate joy and was proud of his three grown grandchildren Harrison, Sarah, and Jane Brock. Some of his humor, determination, and positivity surely have found their way into the next generation as they are the qualities in him that will be missed. A celebration of life for friends and family will be held May 2nd at 3pm at Michael’s On East, 1212 East Avenue Sarasota FL, 34236. In lieu of flowers please make a donation to a charity of your choice.

Neil Drummond Saunders age 88, left us on April 19th after a long life and a short battle with cancer. Never the one to complain he is now free again. In life his sense of adventure kept him moving forward with faith in the better nature of... View Obituary & Service Information

The family of Neil Drummond Saunders created this Life Tributes page to make it easy to share your memories.

Send flowers to the Saunders family.