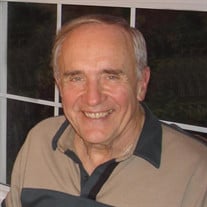 Norman (Norm) James Pokorny, 86 of Venice, FL and formerly of Rockville, MD and Rye, NH, passed away on September 5th, 2021 at Venice Regional Hospital after a brief illness. He was the devoted husband of Carolyn (Dennehy) Pokorny his beloved wife of 55 years who passed in 2016. Norm was born in Clutier, Iowa on September 27, 1934, the oldest son of John and Tillie (Chisek) Pokorny. He was raised on his family’s now 100 year farm in Iowa and was a very proud member of the 4-H Club. He graduated from Loras Academy in Debuque before attending University of Iowa in Ames where he graduated with a degree in Mechanical Engineering. Norm went on to earn his Professional Engineering License. Norm enlisted in the Army and served two years in Ft. Belvoir, Virginia where he met the love of his life, Carolyn Dennehy of Quincy, MA. They married in April 1960, settled in Rockville, MD, and had three daughters. A successful entrepreneur, Norm founded Seasonair, Inc., a heating, air conditioning and refrigeration business, in 1966. Today Seasonair is one of the largest commercial air conditioning and heating contractors in the Washington, D.C. area. Norm and Carolyn uprooted from Maryland and became snowbirds in 2000 spending summers in Rye, NH and winters in Venice, FL. Norm loved the warm Florida weather and walking the beach every morning picking up seashells. They loved to travel and spend time with their daughters. They enjoyed many European trips including ones to visit their daughter Karlene and her family in Germany. Norm was always on the move and loved learning new things. His family and good friends knew his nickname ‘Stormin’ Norman.’ He was an avid Squash player playing up to his 80’s. He also took piano lessons in his 40’s and learned to snow ski in his 60’s. And you ever needed anything, he was the guy to ask. A devoted Catholic and Knights of Columbus member, Norm volunteered time throughout his life to support his church and community. Everyone loved Norm. He had an infectious smile, a wonderful sense of humor and loved to laugh. He always enjoyed dinners and outings with family and friends. He was a dedicated son and brother, wonderful and devoted husband, and a loving, generous father. He adored being a grandfather and most recently a great-grandfather. Norm is survived by daughter’s Jennifer (Andy) Szulinski, Karlene (Andy) Stecher, and Norma Pokorny; grandson Alexander (Emma) Stecher, granddaughter Katharine Stecher, great grandson Maximilian Stecher, and brothers Alvin Pokorny and Robert Pokorny. A Memorial Mass and Celebration of Life to honor Norm will be held at Immaculate Conception Church in Portsmouth, NH. Date to be determined due to COVID-19 concerns. You can direct cards/correspondence to her address: Karlene Stecher 51 Park Ridge Ave Rye, NH 03870 or Jennifer Szulinski 243 Post Rd, #443 Moody, ME 04054

Norman (Norm) James Pokorny, 86 of Venice, FL and formerly of Rockville, MD and Rye, NH, passed away on September 5th, 2021 at Venice Regional Hospital after a brief illness. He was the devoted husband of Carolyn (Dennehy) Pokorny his beloved... View Obituary & Service Information

The family of Norman (Norm) James Pokorny created this Life Tributes page to make it easy to share your memories.

Norman (Norm) James Pokorny, 86 of Venice, FL and formerly of...