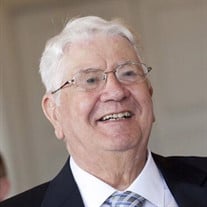 Norman W. (Bill) Swartz, age 80 of Sarasota, FL and formerly of Greenville, MI, passed away on August 8th, 2020, in Sarasota. Bill graduated from Greenville Senior High School, earned his engineering degree from Michigan State University and served in the US Army at Redstone Arsenal in Alabama. On July 16, 1966, Bill married the love of his life, Linda Pat Bucy, and they returned to Greenville, Michigan to settle and raise their family. Bill’s career started as an engineer with Gibson Appliance which later became White Consolidated Industries and finally Electrolux before he moved to Fedders Corporation. Linda and Bill spent 20 of their 51 years together in Greenville. Before retiring in Sarasota, Florida in 1996, they also spent time living in Illinois and New Jersey. Bill’s early days in Sarasota included walking the neighborhood, visiting with friends and spending time as a real estate agent. Bill was also very active with Michigan State University’s Sarasota Alumni chapter for many years and thoroughly enjoyed watching the football and basketball games each season. Bill is survived by his daughter and son-in-law Belinda and Keith Harris; son and daughter-in-law Brooke and Jason Swartz; and 5 grandchildren: Nicholas Harris (25), Greta Harris (21), Lucas Harris (20), Willa Swartz (6), and Luma Swartz (4); along with his sister, Bonnie Petersen and family of Marquette, Michigan, and brother, Brad Swartz and family of Loveland, Colorado. He is preceded in death by his wife, Linda, and his parents, Norman and Alvera Swartz. Bill had a passion for all things Michigan State as well as his children and grandchildren. He will be remembered for being a wonderful father, grandfather, husband and friend. He will be laid to rest at the Sarasota National Cemetery. Due to the current pandemic situation, a private family ceremony will be held at an appropriate time. Messages of condolence and memories may be sent via www.toalebrothers.com.

The family of Norman W. (Bill) Swartz created this Life Tributes page to make it easy to share your memories.

Send flowers to the Swartz family.