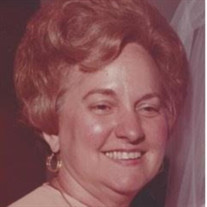 Olga Arca Pestana, age 99, died peacefully on Friday, December 18th after a long battle with dementia. Born in Isle of Pines, Cuba, she became a physician, wife, and mother in Havana, Cuba. Attempting to flee the Castro regime with her family in January, 1962, she was held back by airport authorities who prevented physicians from leaving the country and whose main purpose was to separate families. Being the courageous and strong woman she was, she insisted her husband and daughters leave without her and vowed to find a way to reunite. After refusing to work for nine months, they tired of her crying and complaining daily at the immigration office and gave her a ticket out. Once in this country, to be able to support her family, she redid the medical training required of her to be a physician in this country, while learning English. After several years, she was successful, and obtained a job as a pathologist at the VA hospital in Miami, accomplishing her American Dream. She put both her daughters through college and medical school. In 1976, at the young age of 54, she suffered a stroke which left her hemiplegic on her left side. Her will propelled her to relearn to care for herself as a disabled person, and a year later went back to work part-time until retirement. Creating beautiful ceramics became a hobby she enjoyed, producing works that have become heirlooms in our families. She is survived by her two daughters, Olga Lasater and Ana Bowers, grandchildren Chris Lasater, Jamie Bowers and John Bowers, sons-in-law Larry Lasater and Bert Bowers, and nephews Alvaro (Ilse) De Granda and Gus (Virginia) Grant. Her husband, Jose Pestana preceded her in death (1975). She will be remembered for her loving nature, strong will, and teaching us to stand up for ourselves and to do the right thing. Also, her penchant for taking delight at beating her grandchildren at the board game “Sorry”. She lived at Sunnyside Health Center the last ten years of her life, where she will likely be remembered for her skills at wheelchair volleyball, her loud, boisterous laugh (sometimes disruptive), and her big, wide, ’tongue smile.’ Foregoing a memorial service at this time, her private family funeral service will be held on Saturday, December 26th, at Miami Memorial Park, where she will be laid to rest next to her husband. In lieu of flowers, please consider a donation to Sunnyside Properties, Attention: Employee Bonus Fund, 5201 Bahia Vista, Sarasota, FL 34232, to benefit the amazing employees who took care of her so perfectly and lovingly for so many years.

Olga Arca Pestana, age 99, died peacefully on Friday, December 18th after a long battle with dementia. Born in Isle of Pines, Cuba, she became a physician, wife, and mother in Havana, Cuba. Attempting to flee the Castro regime with her family... View Obituary & Service Information

The family of Olga Arca Pestana created this Life Tributes page to make it easy to share your memories.

Send flowers to the Pestana family.