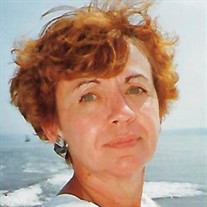 Patricia Ann Bean (nee Schwartz) rejoined her husband, David Harold Bean, Sr., in the Kingdom of Heaven on Friday, September 17th, 2021, just four days shy of their 64th wedding anniversary, after a short illness in Sarasota, Florida. She was 84. Patricia is survived by her four children: Christopher, William, Wendy Bean Tannenbaum, David Harold Bean, Jr., and their immediate families, including nine grandchildren. She is also survived by her sister, Susan Hubbard. Patricia was preceded in death by her parents, Dorothy and Middleton Schwartz and her sister, Margaret Schwartz. Patricia and David met at a church youth group in Syracuse, New York. David “broke the ice” by asking Patricia what he should make with the head of cabbage in his refrigerator. They made coleslaw and fell in love. They were married in 1957 and soon started their family. Patricia loved being a mother and was a fierce protector. She somehow survived her children’s mishaps that included watching them in a runaway “little red wagon” that ripped down a steep hill gaining speed toward a mailbox. Terrified, she ran after them as they laughed hilariously with spilled ice cream cones covering the road and themselves. She came to their rescue many times and it is through her loving devotion that her children consider her a saint. Patricia returned to the workforce after her children were enrolled in school. She was a receptionist in Shaw Hall at Syracuse University and progressed up the university’s administrative ranks to reach executive secretary to several Deans in the School of Education over her career. David and Patricia moved to Sarasota, Florida upon retirement, and traded wild central New York winters for tropical storms and hurricanes! They made many friends in the local Sarasota retirement community, and will be deeply missed. Patricia’s ashes will be interred at Sarasota National Cemetery in Florida; funeral plans are forthcoming. In lieu of flowers, donations may be made in Patricia’s memory to St. Jude Children’s Research Hospital at www.StJude.org “The loveliest masterpiece of the heart of God is the heart of a mother.” -- St. Therese of Lisieux, “The Little Flower”

The family of Patricia Ann Bean created this Life Tributes page to make it easy to share your memories.

Send flowers to the Bean family.