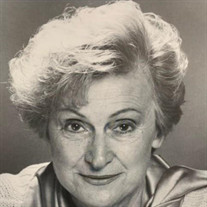 Patricia Ann Carroll, formerly of Evansville, Indiana, died on April 9th, 2021, in Sarasota, Florida, at the age of 95. She was married for 69 years to her beloved husband, John, who died in 2019. Patricia was the daughter of Edward and Marie Healy Kennell and was born in Little Falls, Minnesota, and was raised in Hammond, Indiana. Pat graduated with a Masters of Fine Arts Degree from The Goodman Theater of the Chicago Art Institute. She was a professional actress and a member of the Actors Equity and the Screen Actors Guild. Pat performed throughout the Eastern United States both before and after her marriage to John Carroll in 1950. Upon her marriage, she moved to Evansville, Indiana, where her husband practiced law. She was the first director of the Catholic Theater Guild, as she was raising her six children. After the children were raised, she returned to school and took acting classes at the University of Evansville under John David Lutz, where she performed in many plays. While in Evansville, Pat performed at The New Harmony Theater, the Attic Theater in Detroit, and the Kennedy Center in Washington. Upon moving to Sarasota, she performed in the Asolo Theater, Theater Works, American Stage in St. Petersburg, and the Roundabout Theater on Broadway. In her later years, she returned to her first love, the playing of Chopin and Debussy on her mother’s grand piano. Patricia and John had six children: Barbara Carroll Rogers (Doug) of Branford, Connecticut; Timothy Carroll (Jonathan) of Palm Springs, California; John Patrick Carroll (Susan) of Sebring, Florida; Brian Carroll (Nancy) of Evansville, Indiana; Cezanne Carroll Allen (Demi) of Bainbridge Island, Washington; and John Carroll Jr. of Seattle, Washington; six grandchildren: Michael and Kimberly Carroll, Benjamin and Sean Carroll, and Haley and Bryson Allen, and step-grandson Adam Rogers. A funeral Mass will be held on May 1st, 2021, at 10:30 a.m. at St. Thomas More Catholic Church in Sarasota. Charitable contributions in Pat’s honor may be sent to University of Evansville Theater Department or to St. Jude’s Children’s Research Hospital, Memphis, Tennessee. TOB💓

Patricia Ann Carroll, formerly of Evansville, Indiana, died on April 9th, 2021, in Sarasota, Florida, at the age of 95. She was married for 69 years to her beloved husband, John, who died in 2019. Patricia was the daughter of Edward and... View Obituary & Service Information

The family of Patricia Ann Carroll created this Life Tributes page to make it easy to share your memories.

Send flowers to the Carroll family.