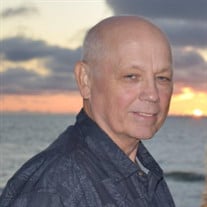 Born February 28, 1957 in Loup City, Nebraska and passed away on February 14, 2022 in Osprey, Florida after a hard fought battle with cancer. Beating the odds after conquering Stage IV throat cancer in 2009, then defeating Stage IIIA lung cancer in 2017, he battled Stage IV throat cancer again in 2020 with everything he had. He was 64 years old. Rick attended high school in Moscow, Idaho, graduating in 1976. After graduation he enlisted into the United States Navy, where he served in the Seabee’s as a Builder. After 5 years of service, Rick was honorably discharged with a rank of Petty Officer Third Class, E-4. After his commitment to the country, Rick attended the University of Nebraska, Omaha for Construction Management while working as a finished carpenter and cabinet maker. Rick finished his career in Dubuque, IA as a construction project manager and moved to Florida with his wife Maribeth. Rick married his best friend, Maribeth Carlisle-Golus, and they flourished for 39 years with their love for travel and adventure. He enjoyed canoeing and fishing the boundary waters with his sons. Rick also had a love of woodworking, boating/fishing and undeniably enjoyed being a helpful hand to anyone in need. He especially loved spending time with all of his family, which includes his two little Havanese, Chelsea and Onyx. Rick is survived by his wife, Maribeth Carlisle-Golus of Osprey, FL; his three sons, Robert John (Sara) Reisdorf of Parrish, FL; Patrick John Golus, of Osprey, FL; and Nathaniel Thomas (Taylor Webb) Golus, of Osprey, FL. Two grandchildren, Sophia and Stephen Reisdorf. Four siblings, Mary Ann and Craig Wolfe, Dave Golus and his wife Pat Rolstad, Cathy Huster, and Terri and Mark Williams. He was preceded in death by his parents Ernest and Wilma; two brothers, Gary and Dennis, and his brother-in-law Roger Huster. A celebration of life will be held Saturday, May 21, 2022 once the ground has thawed here in south Florida. …….. In lieu of flowers the family wishes to honor Rick’s life with donations to: 1) Cancer Research Institute – Head and Neck (Throat) Cancer Research 2) Team Tony Cancer Foundation The family would like to thank Dr. Timothy King (Dubuque, IA), Dr. Matthew D. Byers (Sarasota, FL), and Florida Cancer Specialists for assisting Rick through these battles…..

The family of Patrick (Rick or Goly) Duane Golus created this Life Tributes page to make it easy to share your memories.

Send flowers to the Golus family.