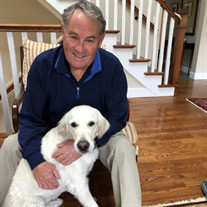 Paul Francis Campagna, age 78, of Sarasota Florida, passed away peacefully on May 11, 2022. He was surrounded by his children and is now at peace with his son Glenn. He is survived by his children, Courtney (Rob) Smith, Kimberly (Norm) Levy, Christopher (Katharine) Campagna, his grandchildren; Connor, Cole, and Cassidy Levy; Sean and Kyle Demeritt; Sophia, Olivia and Luke Campagna; Jacinto Camillo and Tiziano Campagna and his sister, Joan Catska. He is predeceased by his parents Alice and Lawrence Campagna and his son Glenn Campagna. Paul grew up in Brooklyn, NY, and raised his family in Farmington, CT before retiring in Hanover, NH, and spending his later years in Sarasota FL. A beloved father, grandfather, and friend, he was a wonderful, kind, and witty man who loved spending time with his children, grandchildren, and many friends. He especially enjoyed his daily coffee routine with dear friends, Martha’s Vineyard with his family, golfing and attending sporting events. Paul was a teacher and coach in addition to growing a successful construction company from the ground up. A member of the Connecticut Wrestling Hall of Fame, and coach of 8 state championship teams, Paul took greater pride in the men his wrestlers became rather than their performance on the mat. A holder of multiple Master’s degrees, Paul took great joy in being a mentor to his students and children. He would listen intently, ask questions, and say “I am confident you will figure it out.” We love you Dad, Grandfather, and Friend. You will be in our hearts every day. Visitation and service will be held on May 14, 2022, at 9:30 am at Toale Brothers Funeral Home on 40 North Orange Ave, Sarasota Florida. Interment and a reception will follow at Palms Memorial Park (Robert Toale and Sons Funeral Home) on 170 Honore Ave in Sarasota.

Paul Francis Campagna, age 78, of Sarasota Florida, passed away peacefully on May 11, 2022. He was surrounded by his children and is now at peace with his son Glenn. He is survived by his children, Courtney (Rob) Smith, Kimberly (Norm) Levy,... View Obituary & Service Information

The family of Paul Francis Campagna created this Life Tributes page to make it easy to share your memories.

Send flowers to the Campagna family.