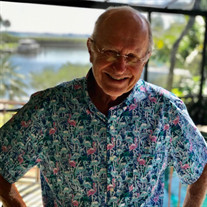 Paul S. Klick III, 77, died on Friday, September 24, 2021, at home in the company of those he loved. The same hour on most Fridays would find Paul, known to family as “Pop,” sitting on the back deck overlooking the Sarasota Bay with a cocktail, calling family and friends who were family to wish them a “Happy Friday” to kickoff the weekend. It was a long list. Pop — also known as “Klicker,” “Rufus,” and some other unpublishable names — most loved gathering with family and friends. He could create a party wherever he went, and did. And if you partied with Rufus, you’d be singing along with his booming, off-key voice to Sweet Caroline, Good Night Irene, and the foot-stomping family favorite: Smokey the Bear. Venue didn’t matter. He’d serenade the family wedding, Eagle Camp, or Windows on the World, just the same. Born June 12, 1944, in Plainfield, N.J., Paul was the fourth of the seven children of Margaret (Hiltz) and Paul S. Klick Jr. In the family, he was a delegator of chores, a protester of mowing, and an instigator of trouble, but always reliable. As the next generation joined the family, summer vacation would find the group gathered, some would say crammed, in a single home at the Jersey Shore. Kitchen tables, closets and water rafts were all fair game for anyone who tried to sleep. Paul usually got a bed. Paul lived a full life. He created his own luck, as he said, through determination and hard work. After serving four years in the U.S. Air Force, achieving rank of Captain at Loring Air Force Base, Paul moved with his young family in 1972 back to New Jersey where he began as an accountant with Equitable, earned his MBA from Rutgers University, and followed promotions with Equitable Real Estate from New York City to Dallas, Texas to Atlanta, Georgia, where he ended his full-time tenure as founder, president and CEO of EQ Services, having gathered countless friends and mentored many along the way. As fortunate as his life was, it offered its share of challenges. He once raced home from a business trip in California knowing his home had burned down, but not whether his children were in it (miraculously, all were safe). He survived the San Francisco Earthquake of 1989 in the doorway of a hotel. He supported his first wife Carol Lane Christian Klick through a five-year ordeal with breast cancer that ultimately took her life in 1991. Paul married Julie Little Klick in 1995, and together the couple broke Paul’s bad luck with California trips by celebrating their honeymoon in Napa Valley. The two adopted a child, William, in 2000, and moved to their home for the next 21 years on the island paradise of Longboat Key, Florida, where Paul segued his work experience into the local investment community, including the development of Sam Sneed’s Tavern and the Hotel Indigo. Paul’s ability to face down adversity was the very heart of his character. In his work, he specialized, and succeeded, in finding stability and opportunity in the most difficult financial climates. He guided his three older children to achieve anything they chose. With Julie he became a tireless advocate for William, who was born with cerebral palsy, leading Paul to serve on the Board of Easter Seals of SW Florida to help other special needs children. Paul donated his talents to many professional organizations and churches over his years. Most recently, he served on the Bay Isles Harbor Section HOA Board and was an Elder at First Presbyterian Church in Sarasota. In 2016, Paul returned to his alma mater, West Virginia Wesleyan College, to join the Board of Trustees, an indication that 50 years is the statute of limitations for whatever happened while he was last there as Treasurer of the Chi Phi fraternity. In addition to his first wife and parents, Paul was predeceased by his sisters Patricia Lanigan, Martha Claire Klick, Margaret Blamble and Carol Ronsley, his brother Robert, and his best friend Robert Frank. He is survived by his wife Julie Little Klick of Longboat Key, FL; his brother Richard (Joan) Klick of Katy, TX; his children, Kristen Klick and Robert White of Ypsilanti, MI; Paul and Ashley Klick of Alexandria, VA; Jeffrey and Elizabeth Klick of Atlanta, GA; and William Klick of Longboat Key, FL; and his seven grandchildren George Eli, John and Joseph White; Ellis and Paul S. “Chappy” Klick V; and Avery Lane and Noel Klick; brothers and sisters-in-law, nieces and nephews, and by many, many friends. With all of his accomplishments and accolades, what Paul truly enjoyed was simply spending time with family and friends. Whether it was playing golf, on the boat, cheering on the Crimson Tide, complaining about the NY Giants, watching the sunset, holding court outside his tent at Eagle Camp in Vermont, “Smokeying,” or complaining that “it’s like a desert in here,” Paul’s version of fun always centered on his people. His joy of just being with the ones he loved was no more obvious than in the last few months of his life. Paul certainly is now in heaven, reunited with those who went before him. And he is waiting, with all of the patience that God gave him in life, prepared with a loud bellow of greeting, for all of the people he loved and had to leave behind. Between now and then, may your glass be full, the wind at your back, and all of your Fridays happy. A memorial service celebrating Paul’s life will be held at 11 a.m. November 6, 2021 at First Presbyterian Church, 2050 Oak St., Sarasota, FL. The service will be streamed live at www.firstpressarasota.org. Interment will be at the Klick family plot in Kutztown, PA. In lieu of flowers, the family asks that donations be made in the memory of Paul S. Klick III to West Virginia Wesleyan College, Development Office, 59 College Ave., Buckhannon, WV 26201.

Paul S. Klick III, 77, died on Friday, September 24, 2021, at home in the company of those he loved. The same hour on most Fridays would find Paul, known to family as &#8220;Pop,&#8221; sitting on the back deck overlooking the Sarasota Bay with... View Obituary & Service Information

The family of Paul S. Klick III created this Life Tributes page to make it easy to share your memories.