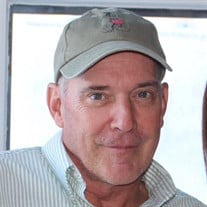 On January 1, 2022, Peter Guenette, loving husband, father, and grandfather, passed away at the age of 67 at his home in Sarasota, FL following a battle with cancer. Peter was born on May 24, 1954, in Fitchburg, MA to J. Andre and Rose R. Guenette. He graduated from Notre Dame High School, Fitchburg, MA in 1972, and from Assumption College, Worcester, MA in 1976. He married Beth A. Montesion in 1977 and had two children, Jeff and Kate, who were his pride and joy. Peter valued hard work and was a man of many professions. He was a teacher and coach at Bishop Guertin High School in Nashua, NH, worked many years as a salesman for A&E Distributors in Leominster MA, was a funeral apprentice at Chapman Cole & Gleason on Cape Cod, and finally retired last year as an engineering tech for the City of Sarasota. Being active was Peter’s favorite pastime, with golf and tennis as his favorite activities. He passed his passion for sports along to his kids whom he coached through their younger years, and he treasured moments watching his grandchildren compete in hockey, lacrosse, and soccer. Peter was preceded in death by his parents, J. Andre Guenette and Rose R. (Provencher) Guenette, his brother John L. Guenette, and his daughter-in-law Margarita Martinez. Peter is survived by his beloved wife of 44 years, Beth of Sarasota, FL, son Jeffrey P. Guenette and his wife Amelia Fisher of Boston, MA, daughter Kaitlin R. Gionta and her husband Stephen of Fairport, NY, three cherished grandchildren Isabella Rose Gionta, Noah Marks Gionta, and newborn Wallace Peter Guenette, brothers J. Andre Guenette of Naples, FL, and James P. Guenette and his wife Karen of Fitchburg, MA, and sister Ann Louise Stephens and her husband Bernard of Fitchburg, and several in-laws, nieces, and nephews. At Peter’s request, there will be no service.

On January 1, 2022, Peter Guenette, loving husband, father, and grandfather, passed away at the age of 67 at his home in Sarasota, FL following a battle with cancer. Peter was born on May 24, 1954, in Fitchburg, MA to J. Andre and Rose R.... View Obituary & Service Information

The family of Peter Guenette created this Life Tributes page to make it easy to share your memories.

Send flowers to the Guenette family.