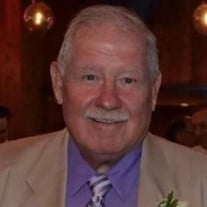 Peter M. Martin, of Bradenton, Florida, was called to heaven on June 7, 2022 at the age of 89. He was preceded in death by his beloved wife, Marilyn, on January 29, 2022. Peter was born in Astoria, New York on September 6, 1932 to Michael and Jean Martin. Peter attended Immaculate Conception Elementary School and William Cullen Bryant High School in Queens, NY, graduating in 1950. Upon graduation, he enlisted in the United States Navy, serving on the USS Hornet and USS Sarasota. Peter met the love of his life, Marilyn, in 1948. They married in 1953, and moved to Brentwood, NY in 1960, where they raised their 5 children. Peter served with the NYPD from 1956-1960 before joining the FDNY where he served from 1960-1987. He loved his job, having served in several roles in the Marine Division, from Wiper to Marine Engineer and Pilot. Peter was a man of many talents. He was a gifted woodworker, crafting many many pieces of furniture over the years, including ,(at last count), over 300 of his famous foot stools. His many hobbies included boating in his beloved Palma Sola Bay, fishing, gardening and sports. He was an avid athlete in his youth, playing both baseball and basketball. He played softball as a young adult and enjoyed a great game of golf well into his 80's. He loved crossword puzzles and even dabbled in leather working for several years. His work ethic was second to none. At times he worked three jobs to support his family, yet still found time to volunteer in his community, either with the church or with civic organizations. He was a man of high principles and always gave 100% to whatever he was undertaking. Peter lived a very full and fulfilling life. While serving on the USS Sarasota as a young man, he sailed into her namesake city in 1951. From that moment, he dreamed of living in the Tampa Bay Area. He made his dream come true in 1986 when he and Marilyn bought their home on Palma Sola Bay. Peter will be greatly missed by his five children; Patrick (Susan), Peter (Pamela), Nancy Guadagno (Albert), Michael (Jennifer), and MaryJean Gessner (Donald); eleven grandchildren; and 3 great-grandchildren. He is also survived by his sister-in-law, Margaret Martin; and his brother-in-law, Ronald Mayer; as well as numerous nieces; and nephews. Mass of Christian Burial to be held at Saints Peter and Paul the Apostles Roman Catholic Church in Bradenton, Florida on Tuesday, June 21, 2022 at 9:30AM. Inurnment at Sarasota National Cemetery at 12:30PM. Memorial contributions may be made to the Alzheimer's Association.

The family of Peter M. Martin created this Life Tributes page to make it easy to share your memories.

Peter M. Martin, of Bradenton, Florida, was called to heaven...

Send flowers to the Martin family.