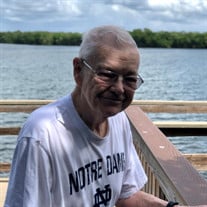 Our beloved father Peter O’Connor passed away peacefully early Monday morning, February 8th, 2021. Dad had been plagued by declining health for the last year, most recently accelerated by a positive diagnosis of COVID-19. Due to an incredible healthcare team, his wife of nearly six decades and all his children were able to say goodbye to him personally on Sunday afternoon. Dad was born on January 25th 1937 to Charles O’Connor and Emily Ryan in New York City. Peter was an only child who lost his father at the age of 5, and was raised quite lovingly by his special mother Emily. She was a famed Radio City Rockette, and loved Dad with all her heart. Both Grandmother and Dad spoke fondly of his days growing up in Queens, with frequent visits to Fire Island. After graduating High School, Dad boarded a train alone to attend college in a place he’d never seen in South Bend, Indiana. The University of Notre Dame became a lifelong love for Dad. His mother never saw the campus until he graduated in 1958 with a Bachelor of Science in Civil Engineering. He was simultaneously Commissioned as an Ensign in the United States Navy Reserve after completing all requirements of the Naval Reserve Officers Training Corps at Notre Dame. Dad was justifiably proud of his long service as an Officer in the Civil Engineer Corps. As a Reservist, Dad returned home to work for the New York City Port Authority. It is there that he met Patricia. Fortune favors the bold. Our shy father asked “Patsy” out, and they fell in love. Mom and Dad were married on the 23rd of November 1963. Many will remember that this was the day after President John F. Kennedy was assassinated in Dallas, TX. A truly somber day for our country was quietly a joyful one for the O’Connor family. Dad was subsequently called to Active Duty as a Regular officer in the USN. His many tours included an assignment of more than a year on the ground in Vietnam with the Seabees during the war. Seabees Can Do. Dad was in the city of Hue near the coast of the South China Sea during the Tet Offensive. While on Active Duty, Peter and Patricia welcomed six children into this beautiful world. Their first-born son Nicholas died shortly after birth, and was loved dearly by Mom and Dad. Sean, Tim, Maggie, Patrick and Eileen followed in the coming years. Dad retired from the Navy in June of 1978 and moved his family to the picturesque seaside town of Cohasset on the South Shore of Boston. From there, Dad attended Harvard’s Kennedy School where he obtained a Master’s Degree in Public Administration. He loved Harvard, and always spoke fondly of his time there. Peter and Pat settled in Cohasset to raise their children and formally switch their rooting loyalties from New York to Boston’s sports teams. They particularly loved the Red Sox and Patriots! After all their children graduated from college, they became “snowbirds”, spending winters on Longboat Key, Florida where they eventually settled permanently. As he always did with a new home, Dad adopted Longboat Key as his own and served the town in many capacities, including Town Commissioner from 2006-2010. He spent many peaceful hours walking his beloved Springer Spaniels, most recently his Phoebe girl, on the gorgeous Gulf Coast beaches. Dad loved life immensely. He was a devoted husband, an adoring father, and a quiet professional. He will be dearly missed by all that were fortunate to know and love him. Peter is survived by his wife Patricia of Longboat Key, FL; his son Sean and his wife Nancy of West Palm Beach, FL; his son Tim of Vail, CO; his daughter Maggie, her husband Ron, and their children Christina and Anthony of Marshfield, MA; his son Patrick, his wife Stacey, and their children Ryan and Emily of Virginia Beach, VA; and his daughter Eileen, her husband Chris, and their children Mark and Valerie of Brookline, NH. Dad’s life will be celebrated on Tuesday, February 16th with Catholic Mass at Saint Mary’s Star of the Sea Church on Longboat Key, FL at 11:00 am. Burial will follow with full military honors at 1:30 pm at Sarasota National Cemetery in Sarasota, FL. In lieu of flowers, donations are greatly appreciated to the Wounded Warrior Project (woundedwarriorproject.org)

Our beloved father Peter O&#8217;Connor passed away peacefully early Monday morning, February 8th, 2021. Dad had been plagued by declining health for the last year, most recently accelerated by a positive diagnosis of COVID-19. Due to an incredible... View Obituary & Service Information

The family of Peter O'Connor created this Life Tributes page to make it easy to share your memories.