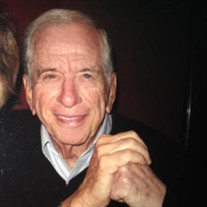 Peter Weill passed away in Lakewood Ranch, Florida. He was born to Gerda and Kurt Weill in Berlin, Germany in 1937. Peter immigrated to the United States of America at the age of two with his mother and brother. They were reunited with his father who had fled Germany a year earlier to escape Nazi persecution. Peter settled with his family in Miami Beach, Florida. He and his brother, Hans, spent much of their youth playing on the Atlantic shore; swimming and befriending US soldiers patrolling the beach. The servicemen graciously shared their Hershey bars with the boys. Peter’s love of chocolate was born! He was an exemplary student who had a thirst for knowledge. In elementary school Peter developed a love of music. As a young boy he played the euphonium and quickly graduated to the trombone. He enjoyed playing in his high school marching band where he also served as Drum Major. At just fourteen years of age Peter played his first professional “gig” in a small band. His group was booked weekends by many small hotels along “South Beach”. After graduating from Miami Beach High School, Peter attended Tulane University, earning a Bachelor of Arts degree in three years. Peter continued graduate studies at the University of Miami where he completed his Juris Doctorate degree in International Law. He was made partner in a private law practice in Miami before being pursued by Sperry Rand Corporation in Blue Bell, Pa. Later Peter relocated to London, England with Sperry. Peter’s expertise in law as it pertained to high technology earned him great respect in the industry. He traveled extensively serving his clients. As a result of counseling many of the industry’s early leaders, namely, Univac, Unisys, ICL, Honeywell, Emulex Corp., Holland, Burroughs, and Dale Computers, Peter developed a passion for high technology. He was known affectionately as a “Techie”. Before returning to the United States, Peter formed AE Consulting Group, Inc. He remained a principal of the company until his retirement. Peter returned to Florida in 1999, making Sarasota his home. He anxiously came out of retirement when offered the opportunity to serve as General Counsel of Business Affairs to Ringling College of Art and Design. During his nearly 20-year association with the college Peter became active in the college community. At one point he served as interim Dean of Students, a position he thoroughly enjoyed. He was honored to sit on their Board of Trustees for twelve years. During his professional years, Peter held many board positions; one being the Exchange Bank of Chicago, the first “drive-in“ bank. He received many commendations including recognition for his 56 years as a member of the Florida Bar Association. Beside his passion for technology, Peter enjoyed photography,politics, horseback riding, fishing, boating, music, and professional sports. He was delighted to learn the game of golf while living in University Park Country Club and most recently played as a member of Laurel Oak Country Club, where he lived for 18 years. Peter was most proud to be an American. He is survived by his loving wife, Mary, his daughter, Jennifer Richardson (Kevin), his stepdaughter, Amanda Coffman (Dean), his stepson, Charles Nichols, three grandchildren, Gabriel Richardson, Connor Coffman and Emma Wukits.,and his special buddy, Mooch. Peter was predeceased by his parents and his brother, Dr. Hans Weill. Due to Covid 19 no services will be held; however, a celebration of his life may be viewed online. The video link is https://youtu.be/LSgQR8EEtVw. Memorial contributions in memory of Peter may be made to Southeastern Guide Dogs, Inc. (4210 77th Street East, Palmetto, Florida 34221) or to the charity of one’s choice. Arrangements by Toale Brothers Funeral Homes.

Peter Weill passed away in Lakewood Ranch, Florida. He was born to Gerda and Kurt Weill in Berlin, Germany in 1937. Peter immigrated to the United States of America at the age of two with his mother and brother. They were reunited with his... View Obituary & Service Information

The family of Peter Weill created this Life Tributes page to make it easy to share your memories.

Peter Weill passed away in Lakewood Ranch, Florida. He was born...

Send flowers to the Weill family.