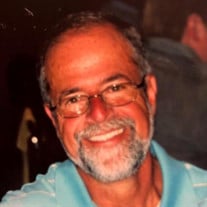 Randy Nicholas Massruha age 71 of Nokomis, FL. formerly Racine, WI. passed away at home on June 14th at 3:10pm with his family by his side. Randy was born December 16th, 1949 in Milwaukee, Wisconsin, the son of Nick and Jean Massruha. He was a part of the first graduating class from J.I. Case High School in 1968. Randy married Jane (Holland) Massruha on December 12th, 1970 at the Church of Resurrection in Racine, WI. Randy started in the produce industry in 1977 for DeBruyn Produce Company. He then became partners for Li'l Badger Producer. Eventually, he started commuting to Chicago to work full time for Harvey Kaiser Inc. and also was a part owner of Dimme Truck Brokerage. In 1999, he bought out Harvey Kaiser Inc. and then became Mass Produce Inc. His final position in the produce industry was as a Consultant for Roland Marketing. Throughout his years in the produce industry Randy developed many lifelong friendships all over the country. He also cherished his friendships with his extended family and friends outside of the produce industry. He loved to work, but his family was everything to him. Randy made sure to pass on his love for Disney, especially the Food & Wine Festivals, to his children and grandchildren. Randy is survived by his wife of 50 years, Jane Massruha, two children Matthew (Angela) Massruha, Florida and Nicole Massruha, Wisconsin, along with two grandsons Gaven and Ethan Massruha. Randy is survived by his sister Dawn (Bob) Stepien and Lisa (Dennis) Furnell, as well as nieces and a nephew, other relatives and friends. Randy is preceded in death by his parents Nick and Jean Massruha, sisters Debra (Bob) Bradley and Dixie Gilbert. Celebration of Life will be held on June 28th at 11:00am with a visitation from 10:30am - 11:00am at Toale Brothers Gulf Gate Chapel, 6903 South Tamiami Trail Sarasota, FL. 34231 Phone 941-955-4171 with reception to follow. The family would like to thank Dr. Kayali of Florida Cancer Center and the staff for all their care and support as well as Tidewell Hospice. In lieu of flowers, contributions to American Cancer Society or Tidewell Hospice would be appreciated.

Randy Nicholas Massruha age 71 of Nokomis, FL. formerly Racine, WI. passed away at home on June 14th at 3:10pm with his family by his side. Randy was born December 16th, 1949 in Milwaukee, Wisconsin, the son of Nick and Jean Massruha. He was... View Obituary & Service Information

The family of Randy Nicholas Massruha created this Life Tributes page to make it easy to share your memories.

Send flowers to the Massruha family.