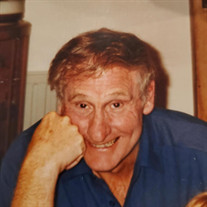 Reginald C. Day of Parrish, Florida died on February 15, 2021, aged 94. Born on January 15, 1927 in Dublin, Ireland to William and Margret (Cooper) Day. Reg, with his older brother Victor, spent his early years playing in the streets of Ireland’s capital city before moving with the family to Bridgwater, Somerset, England. WW II found him living above a Pub (The Crowpill Inn), finishing school, working part time in a factory building Bailey bridges, and serving in the Home Guard all the while dodging bombs dropped courtesy of the Luftwaffe. In 1945, upon turning 18, he joined the Royal Navy. The War over, he married Hilda D. Stafford, a union that produced a son, Christopher, and a daughter, Elizabeth. Furthering his education, Reg attended engineering school in London, and, upon graduation, took a position with British Petroleum in Iran, family in tow in 1957. After this assignment, Reg decided the opportunities were much greater on the other side of the Atlantic, so he took passage to the U.S taking employment with Marathon Oil Co in Findlay Ohio. With this company he spent the rest of his working life as a petroleum engineer, enjoying the American way of life. Beginning a new life, he remarried, and from this union with Mary Miller came daughters Danielle and Stacie, with Sandy, Bruce and Paul rounding out the family. Along with his extended family, golf was his passion, and there was seldom a piano that could avoid his attention—a talent no doubt acquired while living above a Pub. He is survived by his children, grandchildren, and great-grandchildren and will be greatly missed. At this time there are no planned services. In lieu of flowers, donations to Tidewell Hospice of Sarasota would be appreciated.

The family of Reginald C. Day created this Life Tributes page to make it easy to share your memories.

Send flowers to the Day family.