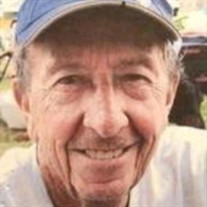 Regis Sylvester McCurry passed away while doing his favorite chore, yard work, on August 1, 2021 at age 96. He was born and raised in Clairton, Pennsylvania, one of seven children. In 1943 he joined the Navy and served in both the Atlantic on a destroyer escort and in the Pacific on an LCI-landing craft, returning home in 1945. Using the GI Bill, he graduated from Muskingum College in Ohio and soon found employment as an insurance adjuster with Ohio Casualty Insurance Company. In 1952, Regis married the love of his life Jean Margaret Rump and they had two children, Valerie and Kevin. In 1963 the family moved to Sarasota, Florida where he continued his work as an insurance adjuster. Jean died in 1982 after thirty years of marriage and raising their two children. After his retirement from Ohio Casualty Insurance, he worked part-time for the City of Sarasota Recreation Department where he started a program for a Senior Softball League and Coed Softball League in 1985. It grew and continues to thrive today. In 1987, he met Judy Okeson, the second love of his life, and they married in May of 1988. Through their travels, they found and fell in love with Kalispell, Montana, then a small town, thirty miles from Glacier National Park. They spent summers there for the next 23 years, buying a summer home there in 1995. He also started a Senior Softball League and Coed Softball League there as well. Even in his mid-80s, on his 70s-and-up team, he was the team's designated runner. In 1989 he was hand picked to play for the Goff Greyhounds in the Senior Softball World Series - where they won the title. He was very proud of his championship ring. He also loved tennis and played doubles into his 90s. Regis and Judy sold the Kalispell house in 2014 but made additional visits to Montana afterward. Judy sadly and unexpectedly passed away in May of this year. They both loved to go and do and see. Regis was always a gregarious and sports-loving fellow whose mottos were "life is good" and "it is what it is". He loved the Pittsburgh Steelers and the Florida Gators. Regis is survived by his daughter Valerie Rachal and husband John; son Kevin McCurry and wife Mary; granddaughter Ashley DeCoux; sister Verla Piper; stepchildren Stan Okeson and wife Diana; Shar DeJoy; Brad Okeson and wife Sherrie; Laura Spencer; and three step grandchildren. He was predeceased by his father and mother Sylvester and Sarah McCurry; sisters Romaine and Laverne; brothers Dwaine, William, and Bernard, and his grandson Ethan DeCoux. Memorial services will be private. Memorial donations may be made to Southern Pines Healthy Pet Clinic, P.O. Box 2021, Hattiesburg, MS 39403.

Regis Sylvester McCurry passed away while doing his favorite chore, yard work, on August 1, 2021 at age 96. He was born and raised in Clairton, Pennsylvania, one of seven children. In 1943 he joined the Navy and served in both the Atlantic... View Obituary & Service Information

The family of Regis Sylvester McCurry created this Life Tributes page to make it easy to share your memories.

Regis Sylvester McCurry passed away while doing his favorite...

Send flowers to the McCurry family.