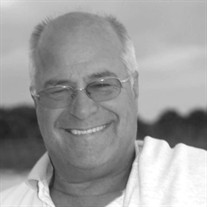 Born in Klamath Falls, Oregon, April 3, 1949, Richard “Dick” Hitchcock was the third child born to Donald “Don” and Sally Hitchcock. With his two sisters, Marsha and Donna, the family moved to Anchorage, Alaska in 1955 where Dick began first grade at North Star Elementary. At the age of 7, Dick showed early signs of his passion for skiing. In 1958, he won the first-place trophy in a slalom race for 8–10-year-olds on Spenard’s Romig Hill. During the summer of 1963 between 8th and 9th grade, Dick took up golf at Forest Park Golf Course and, with only ten lessons, wearing flip-flops and creatively using a left-handed 7 iron, he won the youth golf tournament sponsored by the City of Anchorage, Parks and Recreation Department. Throughout high school, Dick continued his avid love of sports and participated in alpine and cross-country skiing events as well as running cross-country, amassing many more trophies. He punctuated his love of sports into the West High Thespians with starring roles in The Fantastick’s and Lil’ Abner. His singing voice propelled him to becoming the President of the West High School Concert Choir. If that wasn’t enough, Dick was the founding member of the Ramblin’ Five Plus “One” folk group made up of singers and musicians from the Concert Choir. The group regularly performed throughout their high school years at a variety of venues in Anchorage. They were also guest performers at the University of Alaska/Fairbanks music festival in 1966. After graduating from West Anchorage High School in 1967, Dick attended Baylor University and Alaska Methodist University (AMU) where he graduated in 1970 with a degree in Psychology. Dick became an active member of the AMU Ski Team achieving the designation as “Skimeister” for winning several collegiate racing events. Like his dad, Dick worked construction, and during the 1970’s he worked in Alaska’s interior on the Alyeska Pipeline. This afforded him and his future wife, Chris, (m. 1978-1991) and close friends, to save for an extensive sailing adventure. In 1979 the four sailed throughout the South Pacific, ending in Honolulu the following year. After that successful voyage and upon returning home to Anchorage, he raced and taught sailing out of Seward, Alaska, where he also became a sailboat broker. He also tried his luck at commercial fishing and he owned a gift shop in downtown at the Anchorage Westward Hotel where he sold Alaskan made arts and crafts. Dick would personally engrave Ulu’s with the shape of the State of Alaska for his patrons. He also coached a variety of youth sports. Dick served in the Anchorage Fire Department, from 1991-2010, retiring as an Engineer. After retiring, Dick took his love of sailing to Florida, becoming a wholesale distributor for lightning fast WETA Trimarans. He developed a loyal list of clients throughout the Southeast United States and participated in numerous sailing regattas, earning him the friendship and respect of everyone who knew him. Ever young at heart, Dick’s love of music and sense of rhythm led him to become a competitive dancer, adding more trophies to his collection for his dexterity on the dance floor. Dick served on the Board of Directors for the Venice Youth Boating Association for several years and his love of and enthusiasm for sailing had a lasting impact on the youth in the area. Dick’s love of movement and adventure also included riding bicycles, motorcycles and horses. He rekindled his love of downhill skiing in 2020 enjoying ski resorts in Arizona, Colorado and Utah. He also took up golf again and was avidly working on his swing with his new driver. And, grinning from ear-to-ear, he did a little wake boarding on Lake Chelan in Washington last summer too! Dick is survived by his sweetheart, Lynn (Tapscott) Maier; his sisters Marsha Jackson (Dale), Donna Martin (Patrick); his two children, Brianna Hitchcock (Ryan Schmittinger) and Kyle Hitchcock and his dog, Bert; their mother Chris (Drake) Vasileff; and grandchildren Noah, Ellen, Lauren and their dogs Homer and Charlie. He was predeceased by his parents, Don and Sally Hitchcock. Memorial services will be held at a future date when the family determines it is safe to do so. Donations in Dick’s honor and memory can be made to: • http://www.TheMagicYarnProject.com • http://www.VeniceYouthBoating.com • Or a charity of your choice.

The family of Richard "Dick" Wayne Hitchcock created this Life Tributes page to make it easy to share your memories.

Send flowers to the Hitchcock family.