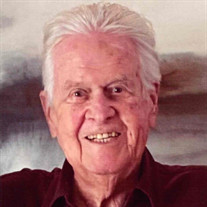 Richard (Rick) E. Gamel of Venice, Florida passed away suddenly on Friday, October 22, 2021 at his home. He was 87 years old. He is survived by his beloved wife Judith, daughters Kerrie Mahoney and Kelly McFadyen, 7 grandchildren and 2 great grandchildren. Rick grew up in New London, Connecticut. His father was a career submarine officer who spent months, and years away from home. Thus, at age 7, Rick became the man of the house until his father returned after the war and retired from active duty. After graduation from Bulkeley High School in New London, Rick served in the Air Force and did a tour of duty in Korea, after which he enrolled at the University of Connecticut where he earned a Bachelor of Science degree and an advanced degree in Physical Therapy. Rick's distinguished career centered around healthcare where he served in administrative and department head positions at the University of Iowa, Creighton University-St. Joseph Hospital Medical Center in Omaha, Nebraska and Methodist Hospital Health System in Memphis, Tennessee. At all of these institutions he created innovative programs and services related to the field of Occupational Health. He later became President and CEO of MDS Consultants, the founder of Med-Search, the country's first patient-physician matching referral system. Throughout his professional career in healthcare, Rick served as an innovator for improved healthcare delivery and, a teacher and mentor to those who worked with him. Those who worked around Rick frequently stated "we were learning and didn't even know it!" Rick met his wife, Judy, while working in Memphis, TN. In 1998 he retired and they moved to Venice, Florida. He loved his community and was a civic leader in Venice, serving as the President of the Venice Men's Club for several years; a member of the Venice Regional Hospital Advisory Board; Jacaranda West Homeowners Association and; the VFW. Central to Rick's pride and joy was his wife Judy and their Yorkies, Jackson and Max. Rick was viewed by his friends and family as the ideal philanthropic philosopher with a lovingly generous heart. A vibrant man who enjoyed a fun filled, adventurous, loving life. His openness, wisdom and humor will live on not only in his immediate family and friends, but in all those whose lives he touched..he was the very best model of a life well lived. Rick's ashes will be interred at Sarasota National Cemetery in a "family only" service. A celebration of life will be held at a later date. Memorials, in lieu of flowers, may be made to St. Jude Children's Research Hospital at www.StJude.org.

Richard (Rick) E. Gamel of Venice, Florida passed away suddenly on Friday, October 22, 2021 at his home. He was 87 years old. He is survived by his beloved wife Judith, daughters Kerrie Mahoney and Kelly McFadyen, 7 grandchildren and 2 great... View Obituary & Service Information

The family of Richard (Rick) E. Gamel created this Life Tributes page to make it easy to share your memories.

Send flowers to the Gamel family.