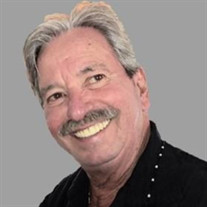 Robert Joseph Kerwin, 70, passed away Friday, Sept 10, 2021 at Sarasota Memorial Hospital from complications due to liver cancer and COPD. He is proceeded in death by his loving wife, Bonnie Kerwin. He is survived by his son, Robert Michael... View Obituary & Service Information

The family of Robert Joseph Kerwin created this Life Tributes page to make it easy to share your memories.

Send flowers to the Kerwin family.