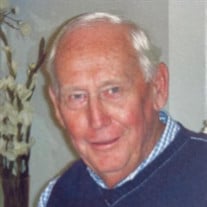 Robert “Buck” Lavender, 89, of Sarasota, Florida, formerly of Westfield, NJ passed away on April 7th 2022 after spending time surrounded by his family. He was born in Ottawa, Illinois to Jesse and Mayme Lavender on February 24,1933. After graduating from Marquette High School in 1951 where he played Football, Baseball and Basketball, he received a BA from Saint Joseph’s College in Rensselaer, IN on an athletic scholarship for Football and Baseball. Buck proudly served in the Marine Corp as a First Lieutenant from 1955 to 1958. He joined JCPenney Co working out of the Corporate offices in New York City and Dallas, Tx and retired to Sarasota, Florida in 1993. Buck was predeceased by his wife Joanne in 2002 after 41 happy years. Together they were blessed with three children Mark Lavender (Lou Ellen), Lisa Ripperger (John) and David Lavender (Liz) along with nine grandchildren; Kimberly, Kyle, Lindsay and Owen Ripperger; Morgan, Grace and Margaret Lavender; Matthew and William Lavender. In 2004 he married Marge Deady where he lived 17 more wonderful years and was blessed with Marge’s three children and 9 grandchildren. David (Cindy) Deady, Christine Deady and Mark (Dawn) Deady; Tyler (Kathryn), Jamie, Katie, Mary, Carolyn, Jessica, Kara, Ryan and Jeff. Buck is survived by his sister Corrine French and predeceased by brothers Don and Jack, sister’s Muriel and Jean. He was an avid golfer who played over 500 golf courses around the world and will always be remembered to be hitting practice golf balls behind the local school to improve his game. Buck was a lifelong Notre Dame and Chicago Cubs fan, but what gave him his greatest joy was the love for his family and friends and travelling the world. While living in Westfield, he was a member of Saint Helen’s church and coached several Baseball and Basketball teams supporting his kids in youth sports. He was also a member of the WHS Booster’s and served as President in 1980. Buck was also a member of St. Thomas More Catholic Church of Sarasota. There were no strangers in Buck’s life as he cared so deeply for his family and friends. Buck’s family sends special thanks to those at Plymouth Harbor who helped him throughout the last few years with such beautiful care. The Lavender Family will hold a visitation at 9am, Monday April 25th with a funeral Mass at 10:00 am at St. Thomas More Catholic Church, Sarasota, Florida. Burial will be Tuesday April 26th at 1:30 pm, at The National Cemetery of Sarasota.

Robert &#8220;Buck&#8221; Lavender, 89, of Sarasota, Florida, formerly of Westfield, NJ passed away on April 7th 2022 after spending time surrounded by his family. He was born in Ottawa, Illinois to Jesse and Mayme Lavender on February 24,1933.... View Obituary & Service Information

The family of Robert "Buck" Lavender created this Life Tributes page to make it easy to share your memories.

Send flowers to the Lavender family.