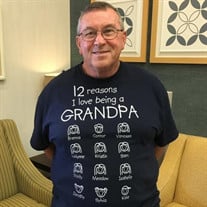 Robert “Rob” McLeod was born on November 1, 1949, to Kenneth and Lorene McLeod in Dowagiac, Michigan. He went home to be with his Lord on September 4, 2021, in Sarasota Florida. Living most of his early life in Dowagiac his family moved to Constantine Michigan during his Senior year where he was a graduate in the Class of ’67. Shortly after his graduation his family moved to Florida, and he began working for a recent upstart in the Restaurant Industry called Burger King. It was at Burger King that he met the love of his life Sarah Hall and in May of 1968 they ran off to South Carolina to elope. Rob spent most of his professional career working for Burger King, spending most of that time as a leader in Operations for Furman’s Inc. based in Sarasota. Rob also spent some time as a Facilitator in the training department for the 7-11 Corporation. Rob was highly involved in the Community in Sarasota where he was a Soccer Coach for over 30 years. He was one of many of a group of parents who was influential in petitioning the School Board of Sarasota to add soccer as a varsity sport. He would then be on the first coaching staff for Riverview High School for the 1983-84 season and became the head Varsity Coach at the beginning of the 1985-86 season. Rob was also active in his church life where he served in children’s ministry, education and discipleship training. Rob was preceded in death by his parents Ken and Lorene McLeod, his sister Debbie Freer, his granddaughter Vanessa McLeod and his great-grandson William Cervantes. Rob is survived by his wife of 53 years Sarah Mcleod, two brothers Mike McLeod (Carol), Kenneth “Steve” McLeod; step-sisters Debra “Lynn” Chubb and Karen “Muffet” Mason (Billy); step-brothers Jimmy Michener, Todd Michener; his children Mike McLeod (Jamie), Tom McLeod, Susan McLeod, Kenny McLeod (Darci), Jacob McLeod; his grandchildren Brenna McLeod, Connor McLeod, Samantha McLeod, Ashlynne Cervantes (Max), Kristin Sanders, Trinity McLeod, Meadow McLeod, Izabelle McLeod, Dorothy McLeod, Sylvia McLeod, Kale McLeod; two great grandchildren Hazel Lessig, and Waylon Cervantes. There will be a viewing Saturday September 11, 2021, at Toale Brothers Funeral Home 6903 S. Tamiami Trail Sarasota, Florida from 10am to 12pm. A Celebration of Life will be held at the Sarasota Alliance Church 7221 Bee Ridge Road at 1:30pm. The family respects any act of kindness that you wish to show to the family; it is recommended that in lieu of flowers that donations be made to The Sarasota Alliance Church “Missionary Fund” to support Missionary efforts around the world.

Robert &#8220;Rob&#8221; McLeod was born on November 1, 1949, to Kenneth and Lorene McLeod in Dowagiac, Michigan. He went home to be with his Lord on September 4, 2021, in Sarasota Florida. Living most of his early life in Dowagiac his family... View Obituary & Service Information

The family of Robert "Rob" McLeod created this Life Tributes page to make it easy to share your memories.

Send flowers to the McLeod family.