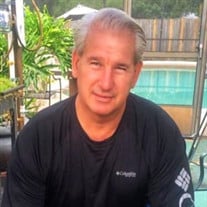 Robert John Shackelford, affectionately known as “Coach Shack” to his friends and students, passed away on Wednesday, July 22, 2020 at Doctor’s Hospital of Sarasota after a month-long battle with COVID-19. He was 61 years old. The proud son of a United States Army colonel, he was born on May 17, 1959 in Fort Benning, Georgia. He later went on to graduate from St. Norbert’s College in Green Bay, Wisconsin with a Bachelor’s degree in commercial advertising. While in Wisconsin, he was a free agent for the Green Bay Packers and continued to cheer them on throughout his life as their biggest and undoubtedly, most enthusiastic, fan. In 1988, he moved to Barbourville, Kentucky, where he received his Master’s Degree in Education and became the head coach of their football team, which had been dormant for 40 years. The youngest head coach in the nation at that time, it only took him two years to produce a winning record. His love of the game eventually led him to Florida where he coached in various capacities for several successful football programs. He participated in numerous Arena Bowl Championships and in the years between 2000 and 2006, he was a driving force in producing one of the best high school defenses in the state at Bradenton Southeast High School. Although Robert was passionate about all things football, his true passion lied in sharing his extensive knowledge of American History with his students at Sarasota High School, where he taught for the last 27 years. A true patriot, he took immense pride in sharing his profound love of country with the next generation and was looking forward to his retirement next year. In addition to his patriotism, he was known for his quick wit, infectious smile, and kind and compassionate spirit. A man of unquestionable integrity and superior intellect, he will he missed by all who were blessed to know him. Robert leaves behind one daughter, Kari Shackelford of Pineville, Kentucky; his grandson and namesake, Christian Robert Shackelford, also of Pineville, Kentucky; his parents, William and Clareen Shackelford of Brandon, Florida; brother, Steven Shackelford of Brandon, Florida; two sisters, Jolyce Lumpkin of Bryant, Arkansas and Elizabeth Baker of Columbus, Georgia; two nieces, Lindley Stone of Edmond, Oklahoma and Lorin Baker of Atlanta, Georgia; girlfriend of 10 years, Catherine Georger of Clermont Florida; and a host of aunts, uncles, and cousins. Due to the current pandemic, funeral arrangements are private; although, a Celebration of Life will be held at a later date. To express your sympathy and in lieu of flowers, donations may be made in Robert’s honor to his favorite charity, The Wounded Warrior Project.

Robert John Shackelford, affectionately known as &#8220;Coach Shack&#8221; to his friends and students, passed away on Wednesday, July 22, 2020 at Doctor&#8217;s Hospital of Sarasota after a month-long battle with COVID-19. He was 61 years old.... View Obituary & Service Information

The family of Robert John Shackelford created this Life Tributes page to make it easy to share your memories.

Send flowers to the Shackelford family.