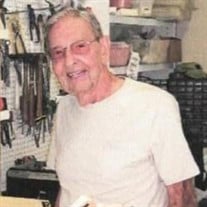 Robert Douglas Wahl, known to his friends as Bob, and his grandchildren and great grandchildren as Poppy, passed peacefully on January 22nd. Born May 19th, 1926 he was the youngest of eleven children, raised humbly on a muck farm in Sodus, NY. His early years instilled in him his work ethic, along with a willingness to get dirt on his hands in the name of a job well done, which he carried through his entire life. Motivated by a mix of patriotism and anxiousness to get out into the world, he joined the Navy at 17. He served during World War II on the USS Parks, a Destroyer escort stationed in the South Pacific. Following his time in the Navy, Bob lived the American dream in Newark, NY. He married his love, Dorothy, in 1948, had a son, Don, and got a steady job paying a dollar an hour at Cordite, earning enough to buy a home. From there, he revisited his early days of hands in the soil, working at C.W. Stuart Nursery until his retirement at 59. Those years were spent well, dedicating his free time to bowling, fishing, spending time with his wife and son, and later doting on his grandchildren. After retirement, Bob and Dorothy moved to Palmetto, Florida, where they lived until their passing. Through those many years in Florida, Bob and Dorothy developed a number of close friends in their community and through their church. They were known as avid card players, not to be trifled with lest you lose all your pennies, and active members of their congregation at First United Methodist Church. After losing his wife last year, Bob remained in Palmetto, independent and active, continuing to maintain their beautiful home and plants, and ensuring every new picture of grandchildren and great-grandchildren found a place on the wall. He also maintained his commitment to God and to his church throughout his life. Even in his last weeks, he continued to dedicate countless hours volunteering for his church’s thrift shop, which now bears his name alongside Dorothy’s in lasting memory of their commitment. Bob loved volunteering with his friends there. His family wants to thank them for the comfort and companionship they offered Bob, especially after Dorothy’s passing. Bob’s life was complete. He served his country, worked hard, loved and provided for his family, and did it all with warmth and positivity. He watched with pride as his son and grandchildren flourished in life. He won more card games than he lost, he was actively involved in the lives of the three generations of Wahls (and Scotts, and Johnsons) who succeeded him, he had many more good days than bad, and in the end and to his final days he lived life on his own terms. His family is deeply saddened to have lost him, but also feels so lucky to have had so many great years with him. He is survived by his son Don, Don’s wife Sharon, his grandchildren, Wendy, Becky, and Zach, and his great-grandchildren Hailey, Madeline, Charlie, Lily, and Louisa. Not a game of 31 will be played, nor a boat ride taken, without them remembering him with love. In lieu of flowers, Bob’s wish was that donations be made to the First United Methodist Church of Palmetto or the American Heart Association.

Robert Douglas Wahl, known to his friends as Bob, and his grandchildren and great grandchildren as Poppy, passed peacefully on January 22nd. Born May 19th, 1926 he was the youngest of eleven children, raised humbly on a muck farm in Sodus,... View Obituary & Service Information

The family of Robert Douglas Wahl created this Life Tributes page to make it easy to share your memories.

Robert Douglas Wahl, known to his friends as Bob, and his grandchildren...

Send flowers to the Wahl family.