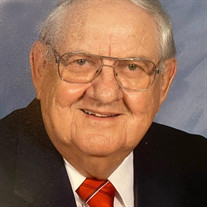 Ronald (Ron) Nelson Case of Sarasota, FL, lovingly known by his family as “Paco,” died peacefully at home on November 17, 2021 at the age of 91 with his wife and family members by his side. Ron was born December 4, 1929 in Alliance, Nebraska, the only son of Oral Nelson and Ina Metcalf Case. After graduating from Hyannis High School, where he was in the band and played basketball, he joined the Army. While stationed at Fort Bragg, NC, he met Anna Jean Brown and they were married on March 4, 1950 in Dillon, NC. Ron served in the United States Army from 1948 until 1954, earning the rank of Corporal. He was a member of the 82nd Airborne Division and was deployed to Japan during the Korean War where he worked in counterintelligence. After being honorably discharged, he earned a Bachelor of Law from Blackstone College of Law and embarked on a career as a reinsurance executive, working for Security Life, General Reinsurance, SCOR, and Global Gerling. Prior to retiring in Sarasota, he lived in Chicago, IL; Denver, CO; Pacifica, CA; Decatur, GA; Westlake Village, CA and Plano, TX. Ron enjoyed singing in the choir at Harvest United Methodist Church in Lakewood Ranch, FL. He is best remembered by his family and friends as an avid storyteller. Ron is survived by his wife Jean of Sarasota, his sons Robert David Case (JoAnn) of Conyers, GA, Douglas Case of San Diego, CA, Kevin Case (Tammy) of Atlanta, GA, his daughters Rhonda Van Lede (Christopher) of Lawrenceville, GA and Renee Johnson (Donald) of Myakka City, FL, his grandchildren Michael Case, Christina Case, Taylor Case, Tanner Case, Ashley Van Lede, Abbigayle Van Lede, Nathan Johnson, Nattalie O’Brien and great grandchildren Imani Russell, Nehemiah Russell, Logan Case, Callum Case, Isla Case, Dawson Johnson, Jamie Johnson, Carter O’Brien and Carson O’Brien. In lieu of flowers, donations may be made to the Tidewell Foundation, 3550 S. Tamiami Trail, Sarasota, FL.

The family of Ronald (Ron) Nelson Case created this Life Tributes page to make it easy to share your memories.

Send flowers to the Case family.