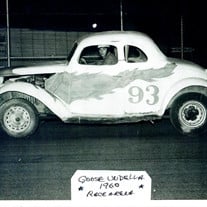 Ronald Undella, affectionately known as “Goose”, 81, of Sarasota, Florida, died at home April 8, 2020, surrounded by loving family. Born January 27, 1939, in Danbury, CT, he started playing sports at an early age. He excelled at them all, from baseball (even earning a tryout for the New York Mets), to hockey and basketball (he loved playing at Madison Square Garden). His passion, however, was auto racing. He was the youngest driver in the history of the Southern New York Racing Association, and raced at the old Danbury Racearena. He continued racing after he, his wife Martha, and their four daughters moved to Sarasota. He raced all the local tracks and always had a large fan club in the stands. At 80 years old, he drove the famous Daytona International Speedway, with laps averaging over 154 mph. Goose was proud of his work at Data Control in Danbury, often saying he helped put a man on the moon. He was inducted into the Danbury Old-Timers Athletic Hall of Fame; was a member of the Army National Guard; and a Bronze Medalist in the Sarasota Superstars Competition. He is predeceased by his parents, Burton and Lois Undella, and his daughter Cindy. He will be forever missed by his sister Joyce (Lee) Chase; and his daughters Marcy (Jim) Alberdi, Julia Undella and Jenny Undella. He was a beloved grandfather to Garrett, Carter and Maxwell Mook; Ellen Undella; and Madeleine Alberdi. Due to the pandemic, the burial will be private. A celebration of his life will be held this summer.

The family of Ronald Undella created this Life Tributes page to make it easy to share your memories.

Send flowers to the Undella family.