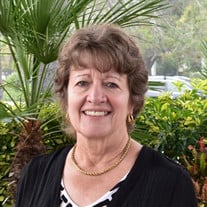 Rosanne Goldman Roble, 67, passed away unexpectedly in Sarasota, Florida on December 15, 2021. She was born on June 4, 1954 in Norfolk, Virginia to Anita Shirley Wagenheim and Milton Hyman Goldman. She resided in Norfolk and Virginia Beach, Virginia until moving to Sarasota full time in 2012. A graduate of Lake Taylor High School, Rosanne began work as a Clerk Typist at the Norfolk Naval Shipyard and attended Tidewater Community College. Throughout her career with the Navy, she worked various assignments in Norfolk at the Navy Material Transportation Office, Naval Air Station, Naval Regional Data Automation Center, Naval Supply Center, Naval Supply Information Systems Activity, and the Fleet and Industrial Supply Center. In developing experience in programming, systems analysis, major hardware and software conversions, and supply and logistics, she grew to become a respected Program Analyst in the Business Support Department and assisted in the implementation of Navy Enterprise Resource Planning for the Navy’s Single Supply Solution. She also developed intimate knowledge and expertise of the Supply System and established herself as a reliable and sought-after Subject Matter Expert throughout the Naval Supply Systems Command. She was a leader and mentor to many and an invaluable asset to all, resulting in significant contributions to the enterprise. As a result of her achievements, she was given multiple awards throughout her career, including the Naval Air Station Norfolk Woman of the Year Award in 1983. She retired in September 2010 following 38 years of service. Rosanne was an active member of her community. She attended All Saint’s Episcopal Church in Virginia Beach, Virginia, where she volunteered her time toward multiple efforts including Youth Group leadership and acolyte scheduling. She was also deeply involved in numerous community organizations. For years, she volunteered with the Sarasota Woman’s Exchange, the Sarasota Shell Club, and Selby Public Library. She was actively engaged as a committee member at the Sarasota Safe Place and Rape Crisis Center (SPARCC) Auxiliary. As a proud resident of Bird Key in Sarasota, she served as the President of the Bird Key Homeowners’ Association and was a current governor of the Bird Key Yacht Club board. She was also a current board member of the Bird Key Women’s Association. In addition, she contributed her time to countless other causes and organizations throughout her life. Rosanne was very well-rounded and had a variety of hobbies. She was a gifted artisan crafter and enjoyed creating pieces of sculptural shell art and stained glass. She loved planting and gardening, in particular orchids, bromeliads, and other Florida native plants. In addition, she enjoyed boating and traveling around the United States and world with her family. She was an avid reader and an engaged member of multiple local book clubs. She also met with a group of women to play mah-jongg weekly. She is a lifelong lover of animals, particularly dogs, and leaves behind her beloved chihuahua, Garbo. Rosanne is preceded in death by her parents and her brother, Lester Goldman. She is survived by her husband of 45 years Commander John Roble (USN, Ret.), her son John Ryan Roble, and her brother Ross Goldman. She will be sorely missed by her family and friends. A memorial service commemorating Rosanne will be held at the Bird Key Yacht Club on Thursday, December 23 at 11:30 AM. In lieu of flowers, please consider donating in Rosanne’s name to the Sarasota Safe Place and Rape Crisis Center online (https://www.sparcc.net/donation-form/) or by mail (2139 Main Street, Sarasota, FL 34237).

Rosanne Goldman Roble, 67, passed away unexpectedly in Sarasota, Florida on December 15, 2021. She was born on June 4, 1954 in Norfolk, Virginia to Anita Shirley Wagenheim and Milton Hyman Goldman. She resided in Norfolk and Virginia Beach,... View Obituary & Service Information

The family of Rosanne Goldman Roble created this Life Tributes page to make it easy to share your memories.

Send flowers to the Roble family.