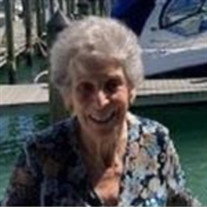 Rosemary Penelope Rees, 93, passed away Monday, April 19, 2021 in Venice, Florida USA. She was born May 4th, 1927 in London United Kingdom to Alexander Fowler Wyncoll and Frances Caroline Wyncoll Cooke. The family relocated to Jamaica where her father was part of British Army regiment and lived there until she was 10, all returning to the UK in 1937. She attended Babington House, a private girl’s school with her sister Angela. WWII ended in 1945 a few days after Rosemary’s 18th birthday. She decided to become a doctor and took courses at the London Matriculation Exams and was accepted at the Royal Free Hospital in London. She met her future husband, Jack Rees, who had returned to study medicine after the war at a university dance. She married on July 24th, 1948 and Melanie was born on June 14th, 1949. Jack graduated when Melanie was 2 and started his internships. This ultimately led to relocation to Ipoh, Malaya in 1952 and then in 1955 they moved to Singapore where Jack opened, The Straits Clinic on Middle road, a medical practice. Gareth was born on August 25, 1956. In September of 1962, Jack, Rosemary and Gareth relocated to Sydney Australia. Melanie followed in August 1963. Rosemary returned to her Medical school studies at Sydney University. In 1965, she graduated with a Bachelor’s of Science degree in Biochemistry and Microbiology and offered a job as Tutor in the Anatomy Department. In 1971 Rosemary relocated with her son Gareth to St. Louis, Missouri, US to attend Washington University. She graduated in 1975 with her PHD in Anatomy. She was offered a job at National Institutes of Health (NIH) in Bethesda, Maryland doing research on spinal cord regeneration. In 1976 she was offered a job teaching anatomy at University of Maryland in Baltimore. In 1979 she was offered a job teaching anatomy to female medicals students at King Faisal University in Saudi Arabia. In 1985 she relocated to the island of Monserrat in the Caribbean to teach anatomy to medical students. In 1988 she returned to the University of Maryland in Baltimore teaching anatomy and was voted the best lecturer during her tenure. In 2008 she began teaching anatomy at the Uniformed Services University of the Health Sciences (USC). She helped train the future graduates for service to the U.S. at home and abroad in the medical corps as medical professionals, nurses, and physicians. In 2015 she retired from the medical field after 50 years of teaching anatomy. She estimates she had taught anatomy to more than 12,000 medical students around the globe. She relocated from Rockville, Maryland to Venice, Florida to be closer to her son Gareth. She kept busy volunteering at the Venice Theater sewing costumes for the actors and taking long walks down Venice Ave to Venice Beach. She was an avid knitter making outfits for her grandchildren and great grandchildren on a weekly basis. She had a passion for growing orchids in Florida and always open to helping others with orchids in need of help. She was an avid traveler and estimated she has circumvented the globe 8 times during her lifetime. Rosemary is survived by daughter Melanie Seymour of Chiswick, London UK; her son Gareth of Venice Florida; grandchildren Thomas Seymour of Melbourne, Australia; Elizabeth Seymour of Shepherds Bush, London, UK; great grandchildren Finn, Clementine, Camille and Peter. To Sign her online guest book, visit Toalebrothers.com

The family of Rosemary Penelope Rees created this Life Tributes page to make it easy to share your memories.

Send flowers to the Rees family.