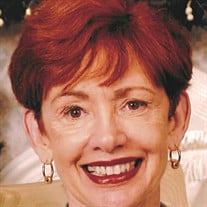 After overcoming breast cancer five years ago, and fighting acute leukemia for two years, then in September surviving two brain surgeries from a fall, Rosemary went to heaven on October 27, 2020, following four weeks of home hospice. Born in Youngwood, PA, on July 21, 1942, the only daughter of John Farrell and Stella Conde, and growing up with four brothers, she developed her competitive side. In high school, she captained her cheerleading team, excelled at gymnastics and swimming, and starred in school plays. In later years her competitive passions were snow skiing, tennis, and bridge. Following high school graduation, and after three years of nursing school at Seton Hill University in Greensburg, PA, Rosemary earned her Registered Nurse designation and license. As an RN, she lived and worked for 48 years in the US and around the world in Hong Kong, the Philippines, Vietnam, Switzerland, and France. In mid-career, she earned her Bachelor's and Master's degrees in nursing from Marymount University in Arlington, VA. She leaves behind the love of her life, Lou Schwartz, her daughter Dr. Nicole Vaccaro, her son Michael Vaccaro (Nina), and her surviving brothers, Regis Farrell (Nancy), Patrick Farrell (Sally), and Jimmy (Farrell (Sandee), and nephews, Brian Farrell and Matthew Farrell. Rosemary loved travel. She and Lou toured the US, the Caribbean, Canada, Mexico, Australia, and New Zealand. She misses her bridge and tennis friends, and hopes they miss her joke telling! She looked around the US a long time to decide where to retire. When she came to Sarasota 20 years ago, she knew that this was the place. A Mass of Christian Burial will be held on Monday, Nov. 9, at 10 am, at Our Lady of Mt. Carmel Church on US-41 in Osprey, FL. In lieu of flowers, please give any donation to the charity of your choice.

The family of Rosemary Vaccaro created this Life Tributes page to make it easy to share your memories.

After overcoming breast cancer five years ago, and fighting acute...

Send flowers to the Vaccaro family.