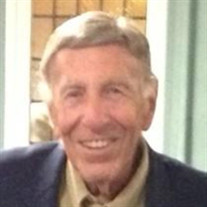 Roy N. Nevans, a food products executive and producer, of Longboat Key, FL and New York, NY and formerly of Greenwich, CT; Rye, NY; and London, died August 27, 2021 at his New York home, surrounded by family. He was 90. Born in NY on July 1, 1931 to Al and Lillian (Schiff) Nevans, Mr. Nevans graduated from Bronx Science High School (1949) and the University of Pennsylvania’s Wharton School of Business (1953), where he roomed with his lifelong best friend, Jeff Rose. He earned an MBA from Columbia University (1957). A devoted US Naval officer, Mr. Nevans served in the Suez Canal area, spent decades in the reserves and retired as a lieutenant commander. He married Virginia Place in 1960. A vice president for marketing and managing director of Henningsen Foods in New York; Waalwijk, the Netherlands; and London (1957-1990), Mr. Nevans was founder and president of Royco International (1991-present) and Teff International. On Broadway (with cousin Albert J. Schiff), Mr. Nevans co-produced Gandhi (1969) and Solitaire/Double Solitaire (1972); on television, produced in London and Los Angeles, Jukebox starring Twiggy and later Britt Ekland (1978-79), and The Roots of Rock and Roll (1981 – made part of the permanent collection of the Rock and Roll Hall of Fame in 2011); off-Broadway Fabulous, the Queen of Musical Comedies (2015) and Two by Tennessee Williams (2016), starring Kathryn Luce Garfunkel; and the Elton John concert in Central Park (1980). Mr. Nevans was president of the Board of Seaplace Condominiums in Longboat Key, FL (2012-2020) and was a member of the Longboat Key Presidents’ Association. He served on the Board of Directors of Global Education Management, Wall Street Institute, and World Trade Club. He was a member of the National Academy of Television Arts and Sciences; US Naval Order; US Naval War College; Penn Club of NY; Jaguar Touring Club; Coveleigh Club (Rye, NY) and River Club (Greenwich, CT). Known for his generosity and love of hosting others, Mr. Nevans at one time maintained homes in Greenwich, CT; Greenwich Village, NY; Longboat Key, FL; and London, all of which he shared with family, friends, and friends of friends. He traveled to six continents, was a million-miler on numerous airlines, and especially loved the many decades he split his time between NY and London. An avid boater, he kept boats at Rye Marina and later at Greenwich’s Palmer Point Marina. An ardent sports fan, he held New York Giants season tickets for more than 40 years and was a loyal attendee at the Wimbledon tennis championships, enthusiastically sharing his tickets with numerous family and friends. He was predeceased in death by his sister, Carol Star Safer. In addition to his wife, the love of his life, he is survived by three daughters, Lisa Nevans Locke of Bethesda, MD, Laurel Nevans of Holmes Beach, FL, and Jude Nevans Cleaver of Virginia Beach, VA; a son-in-law, Patrick Nevans Locke; four grandchildren, Jeremy, Tara, Stuart, and Mikey; and 12 nieces and nephews and their families. A funeral with full military honors will be held at Sarasota National Cemetery in Florida in the future. For more information, contact Toale Brothers Funeral Home, https://www.toalebrothers.com/obituaries/. In lieu of flowers, the family suggests that donations be made in memory of Roy Nevans to Florida Studio Theatre (Attn: Development, 1241 North Palm Ave., Sarasota, FL 34236, floridastudiotheatre.org or call 941/366-9017) or the Navy-Marine Corps Relief Society (875 N Randolph Street, Suite 225, Arlington, VA 22203, or online at www.nmcrs.org).

The family of Roy N. Nevans created this Life Tributes page to make it easy to share your memories.

Send flowers to the Nevans family.