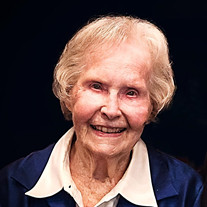 Ruth Dearing Beliles, born March 11, 1929, in Urbana, Ill., passed away peacefully on Nov. 24, 2020. Ruth was valedictorian of her Urbana High School class. She won a full scholastic scholarship to the University of Illinois. There, she joined and has been a lifelong member of the Pi Beta Phi sorority. Graduating in 1951, Ruth found employment on her hometown daily newspaper, The Urbana Courier, as assistant society editor. That is where she met and eventually married her husband of 67 years, David A. Beliles, who, at the time was working in the Courier’s circulation department. Shortly after marriage, she moved with her husband over the next 30 years to Independence, Mo., York, Neb., Arkansas City, Kan., Hannibal, Mo., and Grand Island, Neb., where David served as editor and publisher of the local newspapers. After Ruth’s two children entered high school, she renewed her teaching certificate and taught English to college-bound seniors. She earned her master’s degree and completed graduate work at Wichita State University. While she lived in Grand Island, she was an adjunct professor at Kearney State College (now University of Nebraska at Kearney) and taught freshman English for nine years. She was a voracious reader of books, newspapers and magazines. She liked word puzzles, particularly the Los Angeles Times crossword and other newspaper word games. Ruth and David have lived at Plymouth Harbor, a retirement community, since 2010. Ruth is survived by her husband, David; daughter Lisa (Matt); son Buck; and has four grandchildren — Emily Walsh, Kate Honea, Brian Walsh, and Jessica Beliles, Ruth has three great-grandchildren — Rhys Parry, Maeve Walsh, and Jackson Walsh. Ruth was a member of All Angels by the Sea Episcopal Church on Longboat Key for 25 years. A small family service will be held in late January 2021 at All Angels Church. In lieu of flowers, donations may be made to: University of Illinois, College of Liberal Arts & Sciences, Lincoln Hall, 702 S. Wright St., Urbana, IL 61801; or All Angels by the Sea Episcopal Church, 563 Bay Isles Rd., Longboat Key, FL 34228; or Plymouth Harbor Foundation, 700 John Ringling Blvd., Sarasota, FL, 34236

Ruth Dearing Beliles, born March 11, 1929, in Urbana, Ill., passed away peacefully on Nov. 24, 2020. Ruth was valedictorian of her Urbana High School class. She won a full scholastic scholarship to the University of Illinois. There, she joined... View Obituary & Service Information

The family of Ruth Dearing Beliles created this Life Tributes page to make it easy to share your memories.

Send flowers to the Beliles family.