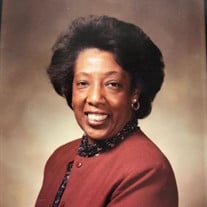 Sadie Pinkston Robinson was born on August 20, 1938, to Marie and Ernest Pinkston in Detroit, Michigan. She died on October 18, 2021, following a twelve-year battle with Parkinson Disease. At the age of sixteen, she completed her early education, with honors, in the Detroit Public Schools. After high school, she attended the University of Michigan and earned a Bachelor's degree. She also earned an M.A. and E.Ds. degree at Wayne State University. In 1961, she married Dr Milton Robinson from New York. She moved to New York City, where she continued her career as a secondary school educator. They later relocated to Michigan, where she taught in five Michigan cities and was an adjunct professor at two Michigan universities. She concluded her professional career as the Assistant Director of Researcher and Evaluation for the Detroit Public School. In 2001, they moved to University Park, Florida. Sadie generously shared her leadership skills and was active in the community and civic affairs. She was a dedicated member of the Bradenton Alumnae Chapter of Delta Sigma Theta, Incorporated., and former President of the Bradenton/Sarasota Chapter of The Links, Incorporated; Secretary of the Florida Suncoast Chapter of The Society, Incorporated; Vice President of the Manasota Chapter of the Association for the Study of African American Life and History (ASALH) and member of the University of Michigan Alumni Association of Sarasota. She received numerous honors and awards for her active role with civic and community groups. Sadie was a devoted wife and mother who gave conscientiously throughout her life. She was engaged and actively involved in the life and education of her children and grandchildren. As for her pastimes, she loved playing bridge and golf. She enjoyed memberships in three Detroit golf groups and was a member of the ladies' golf association at the University Park Country Club. Philanthropy also played an essential part in Sadie's life. In retirement, she contributed her time and resources to more than twenty national and local charities annually. Sadie was a faithful member of St. Martha Catholic Church in Sarasota, Florida. Left to enjoy and continue Sadie's legacy are Milton, her devoted husband of 61 Years; her daughters Valerie Robinson, Esq, Patricia Robinson, M.D; sons-in-law Carlton Johnson, Esq, and Deon Williams M.D; four grandchildren, Christopher, Alexander, Samantha and Andrew; Sisters Marie Jackson, Ernestine Campbell and brother-in-law Randolph Jackson; as well as nieces, nephews, cousins and a host of dear friends. At 11.00 a.m. on Saturday, October 30, a funeral mass will be held at St. Martha Catholic Church, 200 North Orange Avenue, Sarasota, Florida.

Sadie Pinkston Robinson was born on August 20, 1938, to Marie and Ernest Pinkston in Detroit, Michigan. She died on October 18, 2021, following a twelve-year battle with Parkinson Disease. At the age of sixteen, she completed her early education,... View Obituary & Service Information

The family of Sadie Pinkston Robinson created this Life Tributes page to make it easy to share your memories.

Send flowers to the Robinson family.