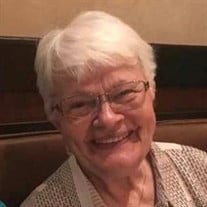 Osprey, Florida – Sally Ann Steele Brochu, 80, died Thursday, July 1, at her home in Osprey, FL in the presence of fourteen members of her loving extended family. Sally was born at Bathurst, New Brunswick, the daughter of Michael and Mildred Doucet Steele. Graduated from St. Paul’s Academy in Westmount, P.Q., Sally moved to Lewiston, ME. After marrying, her travels began. She lived in California, Rhode Island, Connecticut, and Massachusetts before returning to Lewiston, ME with her family. While in California, Sally became a naturalized citizen of the United States, taking pride in voting in every election. For many years Sally was the CFO and co-owner of a construction business in Lewiston, ME, and an enthusiastic member of NAWIC (National Association of Women in Construction). Clients and employees alike remember her as being fair and compassionate. She always had a love for life and a curiosity and a hunger for learning reflected in her attendance at Northeastern University and the University of Maine at Lewiston-Auburn. After the sale of the company in 1987, she pursued her dream of completing a college degree as preparation for ministry in Pastoral Care. Emmanuel College in Boston was the place of growth where she achieved the fulfillment of that dream. She was granted a Bachelor’s Waiver and received her Master of Art Degree in Pastoral Counseling in 1994. Soon after, she became a Board Certified Chaplain with the National Association of Catholic Chaplains. Sally was active in numerous community, civic and church organizations. Her work as Director of Pastoral Care at St. Mary’s Hospital, and especially her involvement with Hospice and its Grieving Children’s program brought much meaning to her life. With her partner, Janet Blakeley, she raised Blakeley grandchildren over a period of ten years, three of whom attended Lewiston schools. Sally valued the importance of passing on what she had learned to young people, especially her many grandchildren. High on her list was assuring them that death was a natural part of life. As they walked the last mile with her, they assured her they knew that dying was not “scary.” She paused long enough to say firmly, “It is NOT!” Sally never stopped evolving and growing. In 2015 she became a Roman Catholic Woman Priest ordained by Bishop Bridget Mary Meehan, ARCWP. From then on she served as priest for the community of Mary Mother of Jesus Inclusive Catholic Community in Sarasota, FL and in leadership at the national level for the Association of Roman Catholic Women Priests. Everywhere she was greatly loved and admired, and is especially remembered for her radiant smile. Her legacy of a life fully-lived continues in her survivors: her three dearly loved children, Michael of Lewiston, Gail of Portland, OR, and Brian of Shrewsbury, MA; thirteen grandchildren; Melissa, Chris, Elizabeth, Ian, Sadie, Thomas, Justin, Vanessa, Eden, Dakota, Caleb, Dorothy and Heather, and seven great-grandchildren. She was predeceased by her sister, Michaeleen Steele, Ottawa, ONT, from whom she learned unconditional love and shared laughter and tears. She is survived by her best friend and partner of twenty-eight years, Janet Blakeley, who enriched her life and brought love and joy into her fall and winter years. A liturgy in celebration of Sally’s life will be held at 4:00 PM on August 7th at Saint Andrew United Church of Christ, 6908 Beneva Road, Sarasota, FL 34298. All friends and family of Sally are welcome. Her one request is that people not wear black – but colorful! – clothes! Ordained are asked to wear their white albs (but no liturgical stoles) and to sit in the congregation. Her cremains will be buried in St. Andrew Memorial Garden following the liturgy. There will be a simple reception in Stuart Hall. link For those living at a distance, the liturgy will be live-streamed. A link will be published on Facebook: Please Google “Sally Ann Steele Brochu” and it will be posted as a public announcement. In lieu of flowers, please send donations in memory of Sally Brochu to Center for Grieving Children, 555 Forest Ave., Portland, ME 04101.

Osprey, Florida &#8211; Sally Ann Steele Brochu, 80, died Thursday, July 1, at her home in Osprey, FL in the presence of fourteen members of her loving extended family. Sally was born at Bathurst, New Brunswick, the daughter of Michael and... View Obituary & Service Information

The family of Sally Ann Brochu created this Life Tributes page to make it easy to share your memories.

Send flowers to the Brochu family.