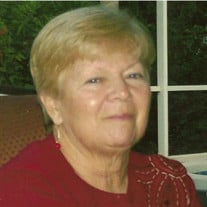 Sharon Lee Hess 72, of Bradenton, FL, passed away Tuesday, March 17, 2020. She was born to the late Louis and Miriam Pike, October 26, 1947, in Riverside, NJ. She married John Hess in 1982 at the First Baptist Church in Mt. Holly NJ. They had a total of six children in their blended family. After John’s retirement from the US Air Force, they relocated to Bradenton, FL and spent their time between Bradenton, FL and Loveland, CO. Sharon had many careers in her lifetime, from being a bank teller to a school bus driver. However, she would tell you that her most important job was being a wife, mother and grandmother. Sharon is survived by her husband: John E Hess, of Bradenton, FL; her sister: Toni Gilbert, of Harrisburg, PA; her six children: James R Roach, of Parker, Co.; Timothy S Roach, of Cheyenne, WY, Amiee-Jo Barth, of Ruskin FL, Kariee-Ann Hess, of Ft Collins Co; Hans Hess, of CA: and Heath Hess, of CA. She is also survived by nine grandchildren and two great grandchildren. Due to the national crisis that is gripping our country at this time, there will be no funeral or memorial service at this time. The hope is to hold one at later date and time. Thank you all, for the prays of support during this difficult time.

The family of Sharon Lee Hess created this Life Tributes page to make it easy to share your memories.

Send flowers to the Hess family.