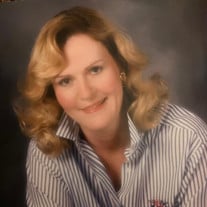 Lister, Shelley Renee age 71, of Sarasota, FL peacefully passed away, at home February 14, 2021. Shelley was born on March 17th, 1949 in Jefferson City Missouri to Major William Clifton Lister and Renee (Lorraine) Elizabeth Loethen Lister. Shelley is survived by her sister Margilu Lister and her niece Nichole Moneghan both of Colorado. Shelley attended Jefferson City High School and University of Missouri, Columbia. Shelley’s career of commercial design and furniture procurement spanned many cities, Nashville, St. Louis, Atlanta and spent the last 20 years in Sarasota. In 2004 she established her own successful business, Abitar Furnishings. Shelley was a “people person”. She was energized by them. The friendships she developed were deep and closely connected. Wherever Shelley was, she started or joined a networking group. Friends and work partners always working together for both business and charity. Shelley was always on the lookout for ways she could help or mentor people. One of Shelley’s most proud accomplishments was founding and mentoring a group of local young women called Designing Daughters. Started in 2009, this organization focused on raising money for local charities through networking & events. She was a force of nature dedicated to supporting small nonprofits, making philanthropy accessible and fostering professional growth. While she did not have any children of her own, she was a mentor, connector and leader to all members, many of whom considered her family. Till the very end Shelley remained a strong presence in the organization, guiding it to its largest granting year (almost $100,000 to 30 Sarasota nonprofits). Shelley was generous with her time and talent and a never wavering, guiding light. She remains an inspiration & will be sorely missed. A memorial service will be held at 4pm on March 17th, 2021 at Toale Brothers Funeral Home, 40 North Orange Avenue, Sarasota, Florida 34236. Livestreaming service with be available through Moonbeam Videocasting www.moonbeamvideocasting.com/mblivestream3 In lieu of flowers, donations can be sent to the Community Foundation of Sarasota County Designing Daughters Fund 2635 Fruitville Road, Sarasota Fl 34237.

The family of Shelley Renee Lister created this Life Tributes page to make it easy to share your memories.

Send flowers to the Lister family.