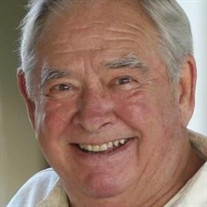 Born in Morrow, Ohio to parents Mary Emma Baldwin McGowan and Charles E. McGowan (deceased prior to Stan’s birth). Stan passed away peacefully at his home, from a progressive illness. Stan was raised in Clinton County, Ohio by his mother and step father, Harry McVey. He graduated from Clarksville – Vernon High School in 1959, where he was very involved in athletics. Stan’s father Harry, had a Grocery and Appliance business in Clarksville, Ohio which is how Stan became involved in the food business and studied to become a Master Butcher. After a short, but successful career with the Kroger Company, Stan and his family relocated to Sarasota in 1967 where he worked for a short time with Publix. With a longing to establish his own business, he opened his first store, The Butcher’s Block on Siesta Key in 1968. He established and sold 3 additional stores over the years, but kept his store on 17th Street in Sarasota which he turned into an exceptional gourmet meat and wine business. The Butcher’s Block is now owned and operated by Stan’s son Scott McGowan. Stan and Scott worked together for many years until Stan retired in 2015. Stan and his wife Stephanie, loved to travel and took many wonderful trips over their 28-year marriage. They both loved the months spent in County Clare Ireland each year where they have many special friends who will miss him greatly. Stan had an extraordinarily engaging personality and a tremendous zest for life. He was loved, admired and respected by all who knew him and exuded a friendliness and warmth that was enjoyed by everyone whose life he touched. He loved gardening, collecting antiques, spending time with family and chatting with his customers and friends. He always had time for a chat and storytelling. He is survived by his wife of 28 years, Stephanie (Dean), his three children, daughter Lorie Parker (John), son Scott McGowan (Sylvie), son Chad McGowan, grandson Coleman McGowan and granddaughter Alexa Medara. He is also survived by his sisters Bertha Lowe (Darrel) and Doris Crothers (John), brothers Charles McGowan (Joan), Marion McVey (Barbara), Dale McVey (Robyn) and Harry J. McVey (Diane). He was pre deceased by brother Harold McVey (Carolyn). His many nieces, nephews, cousins and friends will miss him greatly. A Celebration of Stan’s Life will be held at a later date. In lieu of flowers, contributions may be made to St. Jude Children’s Research Hospital Printable Donation Form (stjude.org) or to Clarksville United Methodist Church, Box 103, Clarksville, OH 45113 .

Born in Morrow, Ohio to parents Mary Emma Baldwin McGowan and Charles E. McGowan (deceased prior to Stan&#8217;s birth). Stan passed away peacefully at his home, from a progressive illness. Stan was raised in Clinton County, Ohio by his mother... View Obituary & Service Information

The family of Stanley L. McGowan created this Life Tributes page to make it easy to share your memories.

Send flowers to the McGowan family.